China and the United Nations 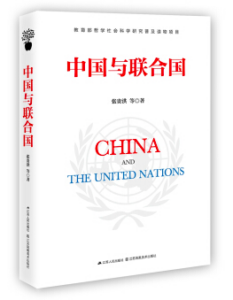 China and the United Nations (zhongguo yu lianheguo) by Zhang Guihong, Executive Director of the United Nations Association of China, is an informative yet rousing description of the relationship between China and the United Nations since the beginning of World War II. This book could be regarded as a sequel to Zhang’s previous book, China and UN in Global Governance (quanqiu zhili zhong de zhongguo yu lianheguo) and further zooms in debates on China’s struggle for inclusion, its incremental involvement, and current contribution to the largest multilateral organization with an eye on leadership role. Drawing on an arduous array of Chinese sources, this book offers a Chinese view of the complex relationship between China and the UN, and concentrates on the historical origins of their relationship.

Where does the UN stand in China’s policy? What factors have played a role in China’s changing outlook towards the UN? To discuss these issues, Prof. Zhang has not only combed the history of China in the UN for seven decades, but also analyzed China’s cooperation pattern that resulted in many achievements of the UN. The author stressed the altering nature of China’s UN diplomacy that has moved from marginal position to a central position, and from a mere participatory to leading type, especially in UN Peacekeeping Missions and Development Agenda (poverty alleviation). And the keyword that covers China’s engagement in the UN since 1945 till now is ‘change’ (bianhua), the author argued.

There are few interesting nuggets of information – for instance, the strategic values of China participating in UN Peacekeeping not only included China’s role in global governance, multilateralism and international security, but also an important venue that facilitated the People’s Liberation Army to ‘go global’ (zou chuqu) in a legal, long-term and systemic way (p. 48-49).

The author claims that China’s current policies such as ‘building a community with a shared future for mankind’, ‘new type of international relations’, and the ‘Belt and Road Initiative’ would further strengthen the UN (p.127-32); while this claim might call for attention, it is still an abstract one without any concrete roadmap.

Although this book highlighted the international dynamics vis-à-vis China’s changing approach towards the UN, it did not amply provide China’s domestic factors apart from few mentions of China’s economic ‘reforms and opening up’ policy. However, this is a popular reading material on the relationship between China and the United Nations. It has correct views yet it focuses on state propaganda. Citation of foreign literature would have made this book across-the-board and more receptive among international readers.