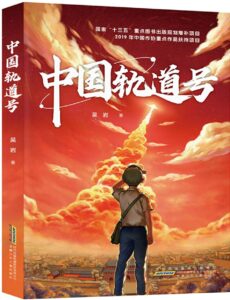 Whenever I miss the past, I can always see the shadow of the future. Over time I finally understood, the stories I penned down were just childhood desires….

There are several hundred authors writing science fiction in China today. There are also several hundred persons teaching it. If there is one thing that this large and quite distinct group of science fiction scholars agrees on, it is that the Chinese science fiction novels and stories, which are written and taught in China, are best in a Chinese setting, moreover based on China’s own achievements in the field of science and technology. The “China Orbit” is the correct answer to the above mentioned dilemma.

The award-winning science fiction novel “《中国轨道号China Orbit》“ written by Prof. Wu Yan, science fiction author and a professor from the Center for Humanities at the Southern University of Science and Technology (南方科技大学), has tried to present his own fascinating experience of space exploration. The “China Orbit” is a science fiction novel,  based on the famous first human spaceflight project 714, which was initiated in 1972 by the famous Chinese aerospace scientist and father of China’s Space Programme Qian Xuesen, who successfully launched China’s first satellite 东方红一Dong Fang Hong (East is Red-1) into orbit. However, this project was canceled due to technical issues, current political chaos, and funding.

The “China Orbit” novel is a little different from the one mentioned above, but it is also about the story of the Chinese launching the first human-crewed spacecraft into the sky in those passing years (1972). This is indeed a story that took place in a unique period of reforms and opening up. The amazing thing is that everything is seen from a child’s point of view. The protagonist of the novel is a youngster from a military compound, and he, together with his parents, witnessed China’s first human flight.

The story told in “China Orbit” takes place in 1972. The Air Force Equipment Research Institute received an urgent order from the military commission to send China’s first manned spacecraft, China Orbit, into space within two years. The children of the Institute of Military Equipment rejoice over this, but must keep their mouths shut. These teenagers who aspire to fly into the blue sky and defend the country are guided from childhood by the exemplary generation of their parents, who eventually integrate themselves into the great cause.

In this novel, Wu Yan wrote a lot about the situation of science and technological development in the 70s, such as quoting Chairman Mao’s quotations in many places, emphasizing “self-reliance 自立” and advocating “investigation and research调查研究”. The book’s illustrations are exquisite, with the visual sense of space flight like “2001: A Space Odyssey”, and it also depicts the words “preparing for war and preparing for the people” written on the wall of the houses. At that time,  children would secretly read some “banned science fiction books,” such as  Jules Verne and H.G. Wells. This story has a feeling of depth and a sense of the times thanks to these highly comprehensive chapters.

The non-fictional record has formed an important feature and added great value to this novel. Wu Yan wrote about the construction and layout of the military compound, which actually depicts the division of the work area and the family area, the lives of the children, and the adults’ work, which are all immersive and existed before the establishment of the socialist market economy. Now, the memory of that distant era is very scarce, so “China Orbit ” is unique in contemporary Chinese science fiction or contemporary Chinese literature to analyze the role of science and technology in the life of the ordinary people of China. Prior to this, descriptions related to this period were mostly dark colors, and Wu Yan’s writings made people see the shadow of disaster and made people feel the courage of a nation to survive in desperate situations.

The “China Orbit” also represents the perplexity and enthusiasm of overseas Chinese scientists who returned to China after reform and opening-up policy. They adhere to the principles of correct selection and employment, complete the scientific tasks given by their superiors with excellence, and boldly try out new experiments for the gain of scientific progress in China. They can portray precisely the reality of the old generation of Chinese scientists — dedication, patriotism, selflessness, cultivation, governance, leaving outstanding scientific achievements and precious scientific wisdom for the motherland and the people.

Partly based on the author’s own experiences in the 1970s, “China Orbit” is a combination of reality and fiction and is in some ways his own memoir infused with sci-fi. The innovative and unique writing method makes his book stand in an unusual way, while even stirring a debate on which genre to best categorize it, be it science fiction, popular science, bildungsroman, children’s literature, military literature, or aerospace literature, which further highlights the book’s wealth of content and innovation.

The “China Orbit” combines the literary aspects of fiction and the scientific aspects of science fiction into one whole. Through literary means, this novel is the best attempt to understand the scientific and technological growth in the last 40 years, especially in Chinese space technology from the eyes of a group of children born in the 50s and 60s, who have had first-hand personal experience of the Chinese transition from a closed-door economy to an open and market-oriented one.

The novel presents a microcosm of the rise of a country’s innovation capability and conveys the spirit of building dreams with innovation and perseverance. Also, it shows the critical role of space achievements in supporting the building of a moderately prosperous society in China.