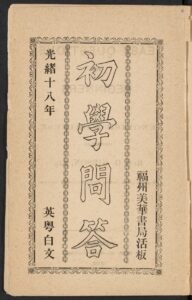 Chuxue wenda, or Easy Questions for Beginners in English & Chinese, is a bilingual book of catechism prepared by the Methodist pastor Otis Gibson (1826–1889). The copy held at the Harvard-Yenching Library was printed in Fuzhou in 1892 by the Methodist Episcopal Mission Press, though an earlier, 1883 version exists.

The book is, as the title suggests, bilingual in English and Chinese. However, it is written in Cantonese rather than classical Chinese or colloquial Mandarin. It was intended as a textbook for Chinese Sunday schools in America, which would have provided courses for students of Chinese descent who spoke Cantonese.

The content of the book is nothing extraordinary, outlining the Old Testament in the first part and addressing important conceptual questions of the New Testament in the second. It is representative of the genre of popular Christian publishing in late Qing/Republican China. Christian missionaries had long recognized the need to “popularize” their beliefs, that is, to proselytize to the masses. With the influx of Westerners and foreign ideas in the late Qing, publication of Western texts, in particular Christian materials, began to flourish. In this period, therefore, there was a boom in the publication of Christian texts in a diverse range of Chinese languages/dialects. These texts were usually written either in Chinese characters that record the customary use of words of the target language/dialect, or in romanizations that record the pronunciation of the language/dialect. The Harvard-Yenching Library includes many such books that were written in a variety of languages/dialects, including, for example, Cantonese, Hokkien, Hokchew, Teochew, and Hakka.

This use of vernacular language as written text predated the official shift from classical Chinese to vernacular Chinese based on Mandarin during the early twentieth century, which evolved from earlier developments of vernacular cultures and languages and Sino-Western cultural exchanges from as early as the sixteenth century. In other words, this book and others of its kind are witnesses of and evidence for a long and complex history of the evolution of Chinese culture and its interaction with the world.