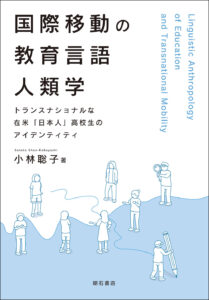 As globalization increases the migration of people across national borders, the number of children growing up in transnational situations is on the rise. How can researchers approach the complex and variable identities that these children create within the networks between their home and host countries while being entangled in the ideologies of race and ethnicity in each place? How can researchers engage with the categories and labels that people they study use and that the researchers themselves assume? Satoko Shao-Kobayashi’s Linguistic Anthropology of Education and Transnational Mobility responds to these questions by focusing on the changing space-time and variable voices in the lively interactions of “Japanese” students in the United States.

The study is based on an ethnographic study of around 25 students who identified as/were categorized as “Japanese” attending a high school in Los Angeles from 2005 to 2007, which formed the basis of the author’s dissertation submitted to the University of California, Santa Barbara in 2008, and a follow-up study over the following 13 years. On the premise that identity is a dynamic, interactional positioning of self and others, the author introduces the notions of transvocality and translocality to highlight the importance of the plurality of voices and the effects of places for subjects undergoing transformations throughout the movement in time and space. By combining multiple research methods, including ethnography, narrative, and conversation analysis, this book portrays children’s diverse identities and their transformations embedded in historical-geographical and interactional contexts from three analytical axes: language, place, and time.

While reading, we encounter many apparent contradictions: a mixed-race Japanese student who labels a group of Japanese students as “Americanized” because they only mingle with other Japanese students and complain about American society; Japanese students who call themselves the derogatory term “Japs”; and a 1.5 generation Korean American boy who teases his 4th generation Japanese American girlfriend by calling her “white.” The data in this book vividly demonstrate that the meanings and interpretations of the racialized categories and labels they use, such as “Japanese,” “FOB” (abbreviation for Fresh Off the Boat), or “Jap,” are never essentially fixed, but are negotiated and created in the interactions embedded in specific contexts. It also highlights how students who are lumped into the single social category of “Japanese” are engaged in complex positioning and differentiation of themselves and others relative to the “Japanese” category, while being caught up in racial/ethnic hierarchies, primarily in the U.S. and Japan.

The author does not give a unified, definitive answer to the reader who hastily asks “what” is the identity of transnationally mobile children. What she does instead is to show the multiplicity, complexity, and variability of their use of categories and labels to negotiate their identities in changing times and places by a multilayered reading of diverse voices. In doing so, she calls into question our assumptions about the use and meaning of racial categories and labels, and argues the importance of careful reading of shifting narratives embedded in the historical-geographical context of each place in the study of identities of transnational youth. Furthermore, she points out the significance of uncovering the issues of ideology, educational system, and geographical conditions that are at work behind their stories through such comprehensive approaches.

Linguistic Anthropology, which has been studying diverse cultures and societies through the lens of language and interrogating hidden power relations, has long been applied to educational research. Its intersections with other fields have led to the development of a wave of inquiry aimed at social justice in education. In the early 2000s, the field of Linguistic Anthropology of Education was established in the U.S., aiming to develop interdisciplinary linguistic anthropology research to stimulate people involved in education from both the field and institutional levels to achieve more equity in education. This study, which builds on linguistic anthropology’s theoretical background while combining cross-disciplinary methods and approaches and offering a multifaced perspective on the identities of mobile children, can be positioned as an essential touchstone for the future development of Linguistic Anthropology of Education in Japan.

At the same time, what enriches this research particularly is the author’s sincere attitude as a researcher seeping out from the pages of this book. Her own changes in perception and position through studying in graduate school, working with children in the field, and moving between Japan and the U.S. herself are openly documented and reflected on in the details of this research, such as the way she conducts interviews or the choice of transcription styles. Her earnest engagement and listening to children taking time will inspire and be a role model for emerging scholars who follow in her footsteps.

This is a vibrant book in which lively interactions and struggles of the children on the transnational move, the researcher, and the people surrounding them who related to each other through the same time and space, emerge within the echoes of numerous voices.