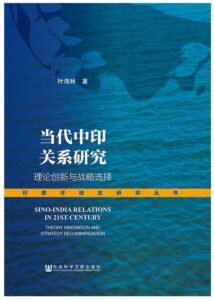 With the academic discussion on “the rise of Asia” and the ongoing Galavan Valley crisis along the Sino-Indian border, Sino-India relations have become an important topic recently. So, with its constant discord yet potential for substantial cooperation, how should one treat the current Sino-Indian bilateral relations? This book is a masterpiece of Chinese scholars who, in recent years, have closely studied the current complex and often contradictory state of Sino-Indian relations. As a senior scholar and policy expert focused on the politics and international relations of South Asia in the National Institute of International Strategy at the Chinese Academy of Social Sciences, Ye Hailin has made an objective and incisive analysis of the current Sino-India relations from the perspective of the evolution of the international system and of the strategic research in this book.

Ye Hailin analyzes how India’s China policy has gradually embarked on the current hardline approach of “problem diplomacy” as its basic means. What factors hinder the establishment of strategic mutual trust and cooperation between China and India? What kind of impact will the American concept of “Indo Pacific” have on India’s diplomatic strategy toward China? Under the current ups and downs of Sino-India relations, what kind of policy should China implement towards India to maintain the overall stability of bilateral relations? In terms of new theory, the author creatively puts forward the theory and strategy of rising countries to deal with the challenges of secondary strategic direction through the case of Sino-India Relations. At the level of policy practice, he clearly expresses the thinking of Chinese strategists on China’s South Asia policy.

The author summarizes the current views on Sino-India Relations in the introduction. The first chapter scrutinizes the existing research about China’s rise and the responses of China’s neighboring countries and points out the advantages and defects of each strategic choice. The second chapter discusses the strategic situation of the South Asia and Indian Ocean Region. The author creatively defines its strategic status in global geopolitics and points out China’s policy options in this area. The third chapter carefully analyzes the unequal cognition and needs of India and China on the three levels of international, regional and bilateral issues, such as the reform of the United Nations Security Council, India’s accession to the Nuclear Suppliers Group and the Sino-Pakistan Economic Corridor. The fourth chapter reveals the risk and opportunity of China’s “One Belt, One Road initiative” in South Asia and India’s complex attitude to it. The fifth chapter analyzes Sino-Indian territorial disputes and explains why the “Doklam Incident” happened and its watershed influence on Sino-Indian relations. The sixth chapter analyzes the Modi government’s “problem diplomacy” attitude towards China, explains the content and meaning of “problem diplomacy”, and evaluates its policy effect. The seventh chapter studies the interaction between the American concept of “Indo-Pacific” and India’s attitude towards such. In chapter eight, the author advises how China, as a rising country, should deal with the challenges from the second strategic direction, mainly from India. At the same time, the author theoretically summarizes how a rising country should deal with the challenges from the secondary strategic direction.

The author also puts forward many innovative arguments. For example, the author challenges popular conceptions, and objectively points out that the South Asia and Indian Ocean Region does not determine the trend of the global system. He then goes on summarize that Modi’s “problem diplomacy” is “to ask China questions according to India’s timetable and ideas, and let these questions test the good or bad of bilateral relations”, which is very different from China’s tendency to define it from a macro perspective and then deal with all aspects of bilateral relations in a flexible way. The author explains that this not reflects the different cultural traditions and ways of thinking, but also different national positions and basic foreign strategic considerations between China and India. Compared to western and Indian scholars’ views, the author gives a more insightful analysis the India’s position and gains in the “Indo-Pacific” and “QUAD” and its adverse effect on Sino-India relations from China’s perspective.

The author creatively explains the interactive features, evolving trends and related influencing factors within current Sino-Indian relations, and analyzes the strategic game being played between the two countries in the United Nations, South Asia and along boundaries. However, the book mainly investigates the current situation of Sino-India relations from the macro strategic perspective, while  not paying enough attention to the historical evolution of Sino-India relations. Also, the book occasionally overemphasizes international patterns and ignores the impact of China and India’s domestic political systems and political agendas on bilateral interactions, especially in the analysis of Sino-India border issues. At the same time, taking Sino-Indian relations as an example, the author puts forward the theory of how rising countries deal with challenges from a secondary strategic direction. Is this theoretical generalization a universal and strong explanation? From this reader’s point of view, the book still needs more examples of relations between other countries in order to come to a definitive conclusion.