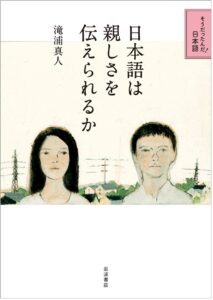 A little over a hundred years ago, the standard language of Japanese was “invented” as a part of the enterprise to establish the modern nation of Japan. Unlike a common language, in which a dominant dialect of a region becomes the official language as it is, the standard language was a language that belonged to no one, artificially formulated as the ideals of being the spiritual bond of the imperial subjects and the manner appropriate for their interaction. Since then, what kind of society has Japanese communication created? What has been overlooked in the debate over the Japanese language? “Can Japanese Communicate Closeness?” by Masato Takiura is a unique book that examines the past, present, and future of the standard language of Japanese from the consistent perspective of interpersonal distance created through language.

The discussion in this book can be summarized as follows. Standard Japanese, especially its mannered expressions such as greetings and honorifics, which was enacted in the establishment of imperial Japan, was a language that had a “respectful and distant” character which valued politeness and formality, placed complex interpersonal relationships in categories, and maintained a considerable distance from others. It created “assured communication” that greatly reduced the uncertainty of social relationships and reassured people that they would be understood if they followed the pattern. The Japanese language has built a society based on such communication for 100 years. However, the standard Japanese language did not envision a language for “close communication” with others, closing the distance beyond the boundaries of hierarchy and reaching out to strangers.  Even when post-war democracy declared communication as being between equal individuals, its formal and distant character was sustained. It might sound easy, but communicating closeness with others in complex interpersonal relationships requires a mature attitude of “trust communication,” in which one trusts the responses of others and steps close to them, despite the great uncertainty of their reactions. The current form of Japanese is not sufficient in expressions of closeness nor readiness of trust. The author describes the present situation of the Japanese language as a “lack of oxygen for communication” (p. xv).  He goes on to argue that “the challenge for the modern Japanese language is how to support mature ‘communication of closeness,’ that is, ‘touching without being insulting’” (p. 174), in order to closely associate with others, something that standard Japanese has never imagined.

Chapter 4, in which the character of modern Japanese is revealed through comparison and contrast among standard Japanese, the pre-modern Japanese of the ordinary people of the Edo period as seen in “Ukiyo-furo” written by Shikitei Samba, and neighboring languages, is particularly interesting in this book. The contrasts with Chinese, which has a wide variety of greeting expressions, and Korean, which has a similar system of honorifics while expressions that penetrate the private sphere of others are acceptable, reveal the character of standard Japanese as “formal” language, which is overly polite, overemphasizes formulaic expressions and maintains a distance between people.

The author’s insightful arguments crossing the boundaries of disciplines and his witty, easy-to-read narrative style that untangle the previous scholarly debates while leading us to think deeply is the book’s great charm. This book may interest not only linguistic scholars but also researchers in all fields related to Japanese culture and society. The book shines a light on Japanese society and culture through the perspective of language, which is part of the infrastructure of Japanese society. As the existing social order undergoes a significant transformation, how should the Japanese language change to interact with unknown others and build diverse and rich human relationships? This book is an excellent work that reconsiders the past, present, and future of the society created through the Japanese language from a sociohistorical perspective and leads us to speculate about its future.