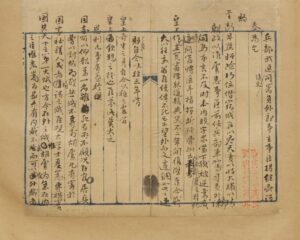 In 1552, the 36-year-old acting Vice Director of the Bureau of Military Appointments of the Ministry of War, Yang Jisheng 楊繼盛 (1516–1555), had become frustrated with the Grand Secretary, Yan Song 嚴嵩, who Yang saw as selfish and treacherous. Yang later recalled that he was in a boat on the way to take up his appointment in Beijing, when his wife suggested that he should dedicate himself to the Ming state by removing Yan the evil minister.

Yang Jisheng therefore composed this memorial to impeach Yan Song. He recounted Yan’s wrongdoings, categorizing them into “ten crimes and five evils,” and requested that the Jiajing 嘉靖 Emperor remove him from power. However, Yang inadvertently offended the hypersensitive Jiajing by suggesting that the Emperor’s two sons could verify his claims because they would not be afraid of potential retaliation from Yan. The Emperor was suspicious of Yang’s motivations in mentioning his sons and so he ordered Yang’s imprisonment. In 1555, Yan had Jiajing sign Yang’s death sentence. By 1562 Yan lost the Emperor’s favor, living in hardship for two years until his death. When Jijiang died in 1567, Yang’s reputation was restored posthumously.

This document is particularly interesting because it is a draft of a memorial. Almost all extant memorials appear in their final form, beautifully written and neatly formatted. This document, likely preserved because of  Yang’s posthumous fame, shows us a memorial in process. It is apparent that Yang made many editorial changes to this draft, crossing out lines and changing the use of words in various places. This text can also be checked against the memorial’s final version to track the changes that Yang made in finalizing the memorial because its content, not the document itself, is extant. One interesting example of his edits is that in this draft Yang asked for Yan’s deposition, which was replaced in the final version by a request for Yan’s execution. The exact details of Yan’s “ten crimes and five evils” also differ. Yang scribbled a line in the margin “your official will not coexist with [Yan] Song within [China] and with the barbarians without” suggesting they were of equal threat to the Ming, which did not appear in the final version. Yang also made minor edits trying to avoid provoking the sensitive Emperor, which he clearly failed to accomplish.