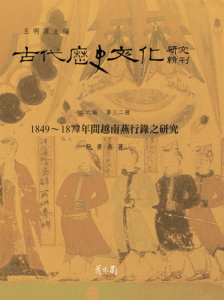 About the book: This book aims to discover how Vietnamese envoys saw China, the Western countries, and its own destiny in the second half of the 19th century, focusing on the travel writings of Vietnamese envoys to China from 1849 to 1877. The 19th century can be said to be “a special period” for all countries in Asia. At that time, many Southeast Asian countries and regions around Vietnam had entered the colonial era. And China, the leader of the East Asian cultural sphere, was also facing a ” significant change not seen in three thousand years”, especially from the end of the Qianlong era (1735-1796). Vietnam was no exception. Under King Tu Duc’s reign, both domestic and international circumstances had forced the Nguyễn Dynasty into contact with the West, leading them to quickly recognize the West, the Celestial Kingdom, and its own way to go, to propose a plan to obviate the fate of being colonized like other Asian countries.

Based on the contents of Vietnamese envoys’ travel writings, from the perspectives of literature, culture, and history, this book discusses the form, development, and the change of the Vietnamese envoys’ perception of the Celestial Kingdom, the West in the second half of the 19th century, by answering some questions, such as: How did the Vietnamese envoys and scholars view the Chinese and Western powers and its fate at that time? At the same time, how they used the knowledge, and the information they learned during the diplomatic mission to China to solve the urgent problems that Vietnam was facing at that time after they came back to Vietnam. By so doing, the analysis can help us gain a better understanding of the relationship between Vietnam and China, Vietnam and the Western powers. And it also helps to promote research on Vietnam-China relations, Vietnam’s pre-colonial history, and cultural collisions between the East and the West in the second half of the 19th century.

About the author: Hoang-Yen Nguyen was a HYI Visiting Scholar from 2020-21.