A Genealogical History of STS and Its Multiple Constructions: To Weave an Extensive Network for Gazing upon the Modern Sciences 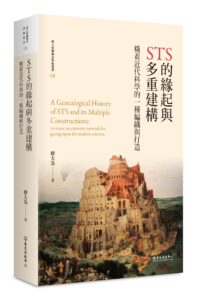 About the book: Why was there a tension between Thomas Kuhn and STS over two decades? In the years of 1960-70s, when wars, protests, and post-colonial developments were engaged and happening, how was the origin of STS, ie., SSK (sociology of scientific knowledge), emerged in this big time? This book rejects the folk legend that Kuhn’s The Structure of scientific revolutions was a major cause of STS’ birth. Rather, it traces a genealogical history for the first two decades of STS, about its emergence, and especially about its multiple historical/social constructions in three orientations: philosophy (eg., of Wittgenstein), social anthropology (eg., of Mary Douglas), and history of science (eg., of Paul Forman). Furthermore, in responding to their times, this book discusses Kuhn’s social activities in early 1970s, and SSK cooperated with historians of science in constructing a “new contemporary critical consciousness” in 1980s. Although this book was about the first two or three generations of STS, about their strategies and debates primarily in UK and US, it was written from a contemporary east Asian STS perspective, and also a reflexive, genealogical viewpoint by someone who is also a STS practitioner in Taiwan. Its aim is to weave and also to recast a new horizon to gaze upon the modern sciences.