Professor Craig was director of the Institute from 1976-1986 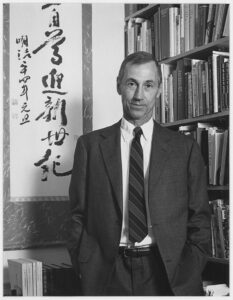 We thank Edward J. Baker, HYI Associate Director, 1981-2005, for sharing the following remembrance about Prof. Craig, and welcome any HYI alumni to submit remembrances as well.

I was saddened to learn of the passing of Professor Al Craig with whom I had the privilege and pleasure of working at the Harvard-Yenching Institute from the time he invited me to join the Institute staff in September 1981 until the end of his tenure in 1986. 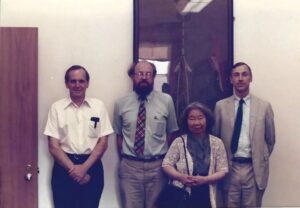 Al was a good-natured, well-organized, efficient administrator who always had an accounting of the current budget in his mind. He seemed always to get the maximum “bang for [the Institute’s] buck.” Each year we would get together at the Institute on a Saturday or Sunday in the late fall, with the various notes we had taken through the year, and put together the budget for the next fiscal year. We would finish before the day was out.

One of Al’s most enduring accomplishments was the smooth, efficient way he incorporated China into the Institute’s programs right after the US and the Peoples Republic of China established diplomatic relations on January 1, 1979. From 1928 to 1949 the Institute’s focus had been on China and then—because of the lack of relations between the 2 countries for the next 30 years—China was completely excluded, except for Hong Kong and Taiwan, from the Institute’s programs. The revival of ties between the two nations’ academies was warmly welcomed in both countries. The Institute soon began to invite both Visiting Scholars and Doctoral Scholarship grantees and before long there was important, substantial Chinese participation in both programs.

Al had told me when I started that he would conduct the candidate interviews in China and Japan for the time being and that he wanted me to be primarily responsible for conducting the interviews in Korea. Nevertheless even in my first year he had me take the train from Hong Kong to Guangzhou to interview the candidates at Zhongshan University. In time we annually came to divide responsibility for the Chinese universities although he continued to do the interviews in Japan and I to do them in Korea. We would trade off on those in Taiwan, Hong Kong, Thailand, Malaysia, and Singapore. As a result of his flexible and supportive leadership, I quickly learned many practical lessons about how to travel in Asia and I gradually became much more broadly knowledgeable about East Asia.

In both Korea and Taiwan for several years after China joined the Institute’s programs, officials at the institutions invited to nominate candidates expressed concern that their institution’s chances would be hurt by the inclusion of China, but, in fact, because Al had seen to it that the number of Visiting Scholars invited was nearly doubled no country or institution was disadvantaged by the inclusion of China. This concern gradually died away. 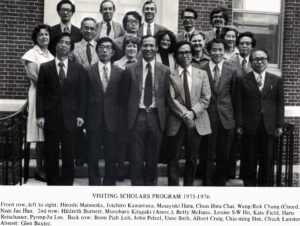 Another even more common misunderstanding of the Institute’s mission was the notion that it only supported grantees in Asian studies, particularly East Asian studies, Al made it clear to me that in fulfilling our mission to promote higher education in Asia we supported scholars in all fields of the humanities and social sciences and in fact the institute invited many Visiting Scholars in western literature and philosophy, etc., as well as the social sciences, such as anthropology, that focused anywhere that interesting research questions arose. On our visits to universities in Asia we always stressed this point and the universities continued to nominate candidates in a wide range of social sciences and humanities.

Al knew when he hired me that I took an active interest in the problems of democracy and human rights in South Korea, that is to say that I was an activist in regard to those issue. Although he was not an activist himself, he never asked me to reign myself in. I’ll never forget the support  he gave me early in 1983 when the Korean democratic leader Kim Dae-jung was released from prison and exiled to the U.S. by the South Korean regime of Chun Doo Hwan. At a meeting I arranged at a Catholic convent in the Maryland suburbs of  Washington DC, Mr. Kim’s long standing, publicly widely known invitation to spend time doing research at Harvard, was confirmed by a representative of the Fairbank Center directly to Mr. Kim. However, soon thereafter a faculty member I knew well came in to my room to inform me it had been decided that Mr. Kim could not be affiliated with the Fairbank Center because he was not a scholar. I was shocked and very angry. Moments later, Al, who had apparently overheard the conversation, came in after the professor had left and said, “Ed, the HYI doesn’t normally affiliate non-scholars, but in this case I think an exception can be made.” I thanked him warmly and said that I would see what else I could do, but would get back to him if need be. Fortunately I was able to arrange an affiliation for Mr. Kim at the Fellows Program of the Center for International Affairs. Although we never spoke of this event again, I still cherish Al’s generous offer.