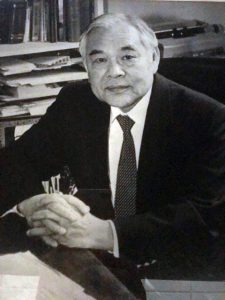 Below is an announcement from Jidong Yang, current Harvard-Yenching Library Director, about Eugene Wu’s passing:

“It is with great sadness that I share that on August 1, 2022, our retired colleague Eugene Wu (Wen-chin Wu) passed away at a hospital near his home in Menlo Park, California. He celebrated his 100th birthday last month. Eugene served as Librarian of Harvard-Yenching Library for 32 years.

Eugene was born in Sichuan Province, China, in 1922. He attended the National Central University in Chongqing (Chungking) as an English major in 1941, when World War II was raging. In 1943, he joined the Foreign Affairs Bureau under the National Military Commission of China as Interpreting Officer, serving in the Infantry Training Centers and the General Staff School in cooperation with the U.S. Army. In early 1945, he was sent to the United States to help train Chinese pilots and other Air Force specialty personnel. After the war ended, he entered the University of Washington in Seattle to complete the war-interrupted education.

In 1951, after receiving a Master in Library Science from UW, Eugene Wu was hired by the Hoover Institution at Stanford University as a cataloger of Chinese materials. In 1959, he was appointed to Curator of the East Asian Collection at Hoover Institution Library and Archives, while enrolled in a Ph.D. program in Chinese studies at Stanford. In 1965, he was recruited by Harvard University as Librarian of Harvard-Yenching Library, a position he would hold until his retirement in 1997.

Eugene Wu made significant contributions to the development of East Asian collections of both Hoover Institution and Harvard-Yenching Library. In 1964-1965, he led a world-wide survey of the status of contemporary China studies, sponsored by the American Council of Learned Societies and the Social Science Research Council. His publications and edited works included the Leaders of 20th Century China: An Annotated Bibliography of Chinese Biographical Works in the Hoover Library (Stanford: Stanford University Press, 1956), Contemporary China: A Research Guide (Stanford: Hoover Institution, 1967), The Secret Speeches of Chairman Mao: From the Hundred Flowers to the Great Leap Forward (Cambridge: Harvard University Press, 1989), and Meiguo Dong Ya tushuguan fazhan shi ji qita (Essays on the History of East Asian Libraries in the United States and Other Subjects. Taipei: Lianjing chubanshe, 2016). Eugene’s impact on East Asian studies librarianship went far beyond the institutions he had served. For decades, he played an important role in the Council on East Asian Libraries. Many East Asian studies scholars, especially those who studied or worked at Stanford and Harvard, benefited from his extensive knowledge and outstanding service. In 1988, Eugene received the Distinguished Service Award from the Association for Asian Studies.