From "Honoring the Ming" to "Submitting to the Qing": The Transformation of Chosŏn Korea's Attitudes towards Qing China, 1627-1910 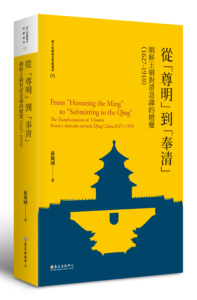 About the book: The book, which embodies a deeply-researched discourse on the history of Sino-Korean relations in the Qing Dynasty, consists of two parts. Part I, which has eight chapters and combines political history, intellectual history, diplomatic history, and some other key topics such as the concept of “Little China”, Kijia worship, Guanwang Temple, the ideology of “taking revenge for the insult”, discusses the evolution of Chosŏn Korean’s attitudes towards Qing dynasty from “honoring the Ming” to “submitting to the Qing.”

Part II of the book, consisting of six chapters, focuses on Korea’s gradually changing attitude towards Qing China through examining the contacts of Korean envoys to Beijing (Hong Dae-yong, the members of Pukhakka, Hong Yang-ho, Yi Sang-jōk, Pak Kyu-su, and Kim Yun-sik) with the Qing people.

In terms of ideology, although Chosŏn Korea had long since adhered to the concept of “Honoring the Ming”, in reality it gradually turned the idea of “despising the Qing” into one of “submitting to the Qing” since it had to rely on Qing China to resist the intrusion of the West and Japan. This change in ideology was a reflection of the changed reality.