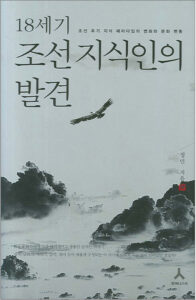 Eighteenth-Century Chosŏn Intellectuals’ Discoveries offers a refreshing study of the intellectual landscape and cultural activities of late Chosŏn Korea (1392-1910). Incorporating a wide range of literary materials that hitherto have not been treated seriously in the field of Korean history—poems, travel diaries, reflections on aesthetics, and recently discovered written conversations (p’ildam, 筆談) between Korean envoys and Japanese scholars—this book sheds new light on the cultural curiosities and sentiments of intellectuals in eighteenth-century Chosŏn.

In discussing the zealous collection and documentation of objects among intellectuals that emerged as a new cultural phenomenon during the eighteenth century, Chǒng structures his study in three parts. The first examines the social context within which these new cultural trends emerged. An influx of new information and exotic items resulting from Chosŏn envoys’ contact with Qing China and Tokugawa Japan, as well as shifting attitudes toward information management, concurrently triggered new perceptions and representations of material goods, self, and Chosŏn society.

In his second section, Chǒng argues that there was a “paradigm shift” in evaluating, selecting, and managing information among literati, reflected in treatises on a variety of subjects—such as flowers, birds, gardening, and tea, among others—that flourished during the eighteenth century. The literati’s documentation of information demonstrated a shift from the preceding metaphysical Neo-Confucian discourse centering on the pursuit of the transcendent Way and transmission of sages’ words to a more self-conscious narrative of personal experience and a realistic depiction of the social landscape; from denunciations of material preoccupations to glorifications of the processes of observations, categorization, and documentation; and from the exclusive emulation of Chinese Tang-Song style literary composition to the acceptance of more diverse Chinese literary trends, such as the works of Gong’an (公安) and Jingling（竟陵）schools in late Ming (1368-1644). While acknowledging the important influence of imported foreign materials and intellectual trends on late-Chosŏn culture, Chǒng emphasizes the efforts of Chosŏn intellectuals to translate their curiosity towards this new information into reflections on and rediscoveries of the self, as well as the history and customs of Chosŏn. Instead of blindly chasing after Chinese cultural trends, Chosŏn literati pragmatically utilized the information and perspectives of Chinese literary works to justify and enrich their own cultural activities, thereby transcending the limits entailed by their contemporary political and social environment.

Chǒng’s third section discusses the networks of friendships, correspondence, and common intellectual inclinations that generated collaborative and cumulative research and the sense of belonging to an unprecedented degree among the self-aware scholarly community of eighteenth-century literati. The book concludes that the new intellectual trend in the eighteenth century demonstrated a shift towards greater self-consciousness and a “usefulness (yuyongsŏng)” and “demand (suyo)”-oriented management of information.

Eighteenth-Century Chosŏn Intellectuals’ Discoveries is an erudite and provocative excursion into the intellectual milieu of the late Chosŏn period that ventures beyond the still-dominant “sirhak 實學” framework in interpreting late Chosŏn intellectual and cultural history. The term “sirhak 實學”, traditionally translated as “practical learning”, was coined during the 1930s by a group of progressive nationalistic Korean scholars. Eager to overturn the Japanese colonial historians’ presentation of Korea as a stagnant traditional order trammeled by pointless metaphysical speculations of Zhuxi-ism, these scholars attached the designation of “sirhak” to the late-Chosŏn intellectual trend, claiming that there was in fact a modernizing strain in the late-Chosŏn intellectual milieu. In addition to characterizing late-Chosŏn thought as “the pursuit of the true,” “pragmatic,” and “evidential,” these scholars schematized “sirhak” scholars into various groups according to the emphasis of their concerns: the School of Administration and Practical usage (經世致用), represented by Chŏng Yagyong（丁若鏞, 1762–1836); the School of Profitable Usage and Benefiting the People（利用厚生）, centered around Pak Chiwŏn (朴趾源,1737–1803); and the School of Seeking Evidence (實事求是), represented by Kim Chŏnghŭi (金正喜, 1786–1856). Although recent researchers have called for more nuanced stances in categorizing the so-called “sirhak” scholars,[1] the principal focus remains fixed on individuals or groups surrounding one particular scholar, yielding an isolated and fragmented picture of the late Chosŏn intellectual landscape.[2]

This book undermines such artificial divisions and characterizations of the so-called “sirhak” schools and reveals the common concerns and cultural inclinations shared by intellectuals. For example, the book demonstrates a common enthusiasm about Wang Shizhen’s 王世貞 (1526-1590) work among scholars from both Pak Chi’wŏn’s and Yi Yonghyu’s schools, who have conventionally been studied separately with great emphasis on their differences.[3] In contrast, Chǒng’s narrative presents some common concerns and changing cultural activities among literati as a response to the shifting world in which they lived, as well as their efforts to make sense of their contemporary environment.

Additionally—and contrary to conventional “sirhak” scholarship which focuses on social-economic thought during the late Chosŏn in search of a trend toward modernity and nationalism—this book examines the cultural milieu from a broader perspective that includes artistic and literary activities. Based on meticulous and extensive research in primary sources, the book suggests that the statecraft reformation and socio-economic concerns of eighteenth-century intellectuals emphasized by conventional scholarship was a far-fetched characterization of intellectual trends during the eighteenth century. Furthermore, Chǒng provides an alternative interpretation of the cultural dynamics of the Chosŏn dynasty by studying the changing sentiment embodied in the cultural activities of the literati.

However, this book is not without shortcomings. While it is intriguing to consider whether intellectual trends during the eighteenth century demonstrated a “paradigm shift” in information management toward a more “usefulness” and “demand”-oriented pattern, this reviewer finds Chǒng’s definitions of “usefulness” and “demand” ambiguous and under-articulated within their eighteenth century social context. Was the information useful and in demand because it was referenced in daily life, because it demonstrated an author’s professionalism within the scholarly community, or because it supported an author’s claim to membership in elite society?  The argument would be more convincing if the author had elaborated on the circulation and consumption patterns of the influx of new information, as well as its social implications.

In sum, Eighteenth-Century Chosŏn Intellectuals’ Discoveries is an informative study on eighteenth-century intellectual trends and cultural activities. The innovative interpretive framework adopted by the author anticipates new directions in the study of Chosŏn intellectual and cultural history.