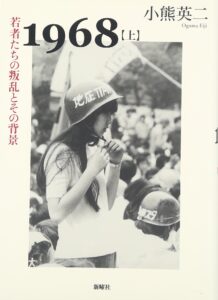 The celebrated socio-historian Oguma Eiji’s latest book offers a fresh and broad perspective for understanding the student revolts that erupted in Japan during the late 1960s and early 1970s. Unlike other books on this theme, which often romanticize the students movements, Oguma historicizes them by illuminating their connections to the economic, educational and social conditions.

The book consists of seventeen chapters in addition to an introduction and conclusion. The first four chapters provide an overview of the historical background of the movements and the complicated relationships among various groups, sects and networks. The author then conducts specific case studies of struggles in universities and high schools and demonstrations at Haneda Airport (opposing the Japanese government support of the U.S. effort in Vietnam), in Sasebo, Nagasaki (opposing the entry of U.S. nuclear-powered vessels), and in Sanrizuka, Chiba (resisting the construction of Narita International Airport), and other activities by the “Peace for Vietnam” Committee (Beheiren), the United Red Army, and the women’s liberation movement. Although Beheiren, Oguma argues, fostered an excellent practical model for organizing a political movement, the student revolts largely aspired to abstract Marxist slogans (like “overthrowing capitalism”) and sectarian violence to defend their distinctive ideology. The author thus contends that the revolts were not really a political movement aiming at a specific goal, but an opportunity for students to discover their identity.

Oguma emphasizes that Japan’s rapid economic growth in the sixties led to a dramatic change in social milieu as the country shifted from a developing to a developed nation. It followed that the younger generation had dual educational experiences: the postwar humanistic democratic education before the sixties and the cram-school mass education oriented toward the fiercely competitive examinations afterwards. Consequently, the generation suffered not “modern unhappiness” (i.e. material deprivation from war and/or poverty) but “contemporary unhappiness,” in which material comfort and “automated” education led to an identity crisis, a feeling of entrapment, and a lack of reality. Therefore, while criticizing the school system and capitalism as a whole, young people found the revolts to be a site that enabled them to regain a sense of humanity and confirm their identity. As evidenced in the case of the Red Army, in which the leaders and members killed twelve of their colleagues, however, many of the revolts were inwardly oriented with little social appeal.

Japan’s current economic recession draws scholars’ and activists’ attention back to the late 1960s. Oguma’s book is most significant in this context not because it serves to revive the past political movements in a heroic way, but because it highlights their problems and opens up a debate on how to create new possibilities for a civil rights movement. 1968 should be widely read outside of Japan, and hence an English translation is expected.