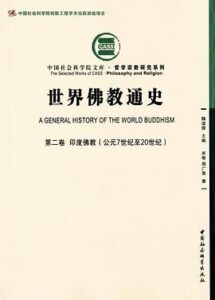 In 2015, the series of A General History of The World Buddhism edited by Prof. Wei Daoru was published, which has made another important achievement for the study of Buddhism in China. As the second volume of the series, this book is written by Prof. Zhou Guangrong, and its content concentrates on the development and changes of Buddhism in India from the 7th to the 20th century AD. During this period, Buddhism experienced its last prime in India and then gradually declined. It was not until the beginning of the Buddhist revival movement in the 19th century that it reappeared in its birthplace. The author condenses this long and complex history into five chapters chronologically, and according to the characteristics of different phases, adjusts the emphasis of each chapter. From this, we can get a very clear understanding of the author’s cognition and judgement on this period of history.

In the first chapter, Prof. Zhou introduces Indian Buddhism under the rule of Śīlāditya during the 7th century. At that time, Śīlāditya conquered the most regions of North India and founded a strong country. With his support, Nālandā became the most renowned Buddhist center and played a significant role in Buddhist history. The author discusses not only Nālandā’s scale, management, and teaching, but also some important debates between Yogācāra and Madhyamakā which happened there. It is no doubt that Nālandā was the key point at this stage, and Prof. Zhou is keenly aware of this and centers on it. The next two chapters discuss Vajrayana and Tantra Buddhism, which arose between the eighth and mid-ninth centuries. The author adopts a similar method here, that is, taking the classic literature and esoteric rituals as clues, and by analyzing their content, characteristics, and transmission, shows the changing trend of Indian Buddhism. Prof. Zhou has demonstrated outstanding philological skills, patience, and meticulousness. As far as I know, many materials are comprehensively explained for the first time in China.

The fourth chapter turns to specific persons who were Buddhist masters from the mid-ninth to 13th century. We could easily find that the author has changed the perspectives many times, from Nālandā, literature to specific people. His strategy is effective because Indian Buddhism varied from period to period. For this period, it had lost its influence on a large scale and could only be sustained by these monks who were the last hope and representatives. However, they still couldn’t stop the disappearance of Buddhism in India. After centuries of silence, with the push of external forces, Buddhism was revived in India. What these external forces were and what they had done is the main content of fifth chapter. The author mainly refers to the work of the Theosophical Society, the Buddha Gaya Maha Bodhi Society and so on. This section is very helpful for understanding modern Indian Buddhism which was very different from ancient history.

Completing a general history is a difficult job because it requires the author to have sufficient and comprehensive background knowledge, as well as a clear argument. I think Prof. Zhou has provided a good example of how to write a religious history.