A Silent Revolution? Genetically Modified Crops and the Social Change of a Village in Central China 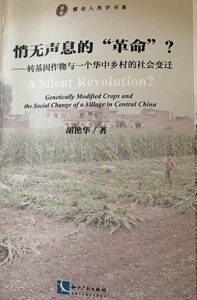 Hu Yanhua’s book touches upon a crucial issue in reform China—the social transformation of rural society, through the lens of genetically modified cotton in Tan village (潭村) in Hubei Province. Throughout the book, Hu asks an important empirical question: why Tan villagers spend most of their time at leisure instead of stereotypically engaging with tedious farming work. Tracing back to the time before China’s liberation, Hu details the transformation of the plantation structure from “men farming and women weaving” to “men working-in-the-city and women farming,” and from long and intensive labor to short and easy one. On average, Tan villagers, especially left-behind women, spend ten hours per day playing mahjong and dancing at the playground. Hu pays special attention to the senior women in Tan village as China’s urbanization has rendered the younger generation to become migrant workers in the city.

Due to their “natural” resistance to insects, disease, and weeds, genetically modified crops require less farming time and thus bring convenience to growers. The looming threat of genetically modified crops to the environment is beyond the concern of Tan villagers, since the promotion of the “magical seeds” is a top-down process initiated by the local government and facilitated by agricultural experts and seed agencies. In such a process, Tan villagers have lost their voices through their ignorance of what is indeed “genetically modified.” But in terms of cost-effectiveness, Tan villagers seem to benefit from growing the new crops because it saves time and labor and brings a higher yield.

Taking the perspective of cultural ecology, Hu presents a holistic but no less detailed account of the relations between means of livelihood and the social structure of rural society. Moral issues with the risk of corrupting current household structure appeared, which Hu delineates vividly. This book serves as a satisfactory ethnography especially for readers interested in current situations in rural China.