Adventures on the Maritime Frontier: Minamoto no Tametomo on the Island of Women 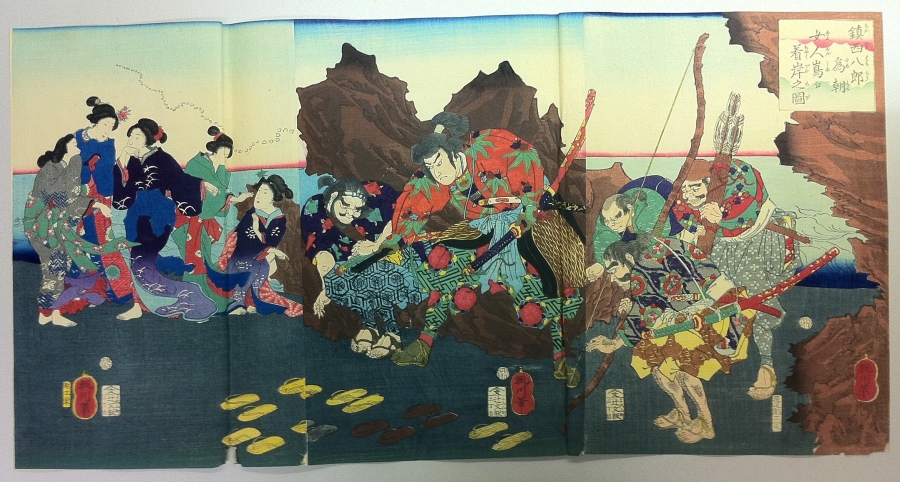 Original image held by the Harvard-Yenching Library of the Harvard College Library, Harvard University. Image is taken from 近世木版画, a collection of 79 wood-block prints.

Author: attributed to the Utagawa school

The shining hero Minamoto no Tametomo, a battle-proven warrior from the 12th century, is banned to the island of Ōshima in eastern Japan, where he tirelessly enlightens the fisherfolks with his wisdom and strength. One day, he observes birds flying from beyond the Kuroshio, a rapid current in the open Pacific the fisherfolks would not dare to cross. Tametomo, however, sets sail and within just one night, reaches the island of women, an isolated colony of amazons. Tametomo stumbles over a number of straw sandals the women keep on the shore for their husbands’ return. In awe from the god of the sea, they meet only once a year, when the winds allow to sail from the southerly island of men. Having lost the art of writing and enthralled by superstitions, the amazons are miraculously bestowed the ability to speak Japanese when the flamboyant hero arrives, since the goddess Amaterasu has decided that the island ought henceforth to be a part of Japan.

Takizawa Bakin’s (1767–1848) best-selling novel Wondrous Tales of the Crescent Moon (Chinsetsu yumihari tsuki) published in 1807–11, which inspired this woodblock print by a student of the Utagawa school some six decades later, spun a world of divine powers and exotic wonders around the life of an historical swordsman, blurring facts and fantasy in the manner of China’s early modern novels. But more than pure entertainment for paying urbanites, Bakin’s work reflects the Japanese public’s growing interest in the Pacific as a space of adventure and discovery at the boundary of the human realm. Under the influence of the geopolitical debates that since Hayashi Shihei’s Glance at Three Countries of 1785 became carried out in printed publications, the fancy of intellectuals and commoners was directed to the Pacific as a realm of adventurous opportunity. Bakin’s novel unfolded a lasting impact upon the visual and literary imaginary of the Pacific by outlining the erotic and exotifying dimensions so central to the colonial ‘South Sea Literature’ of the early 20th century. Until today, Tametomo’s fantastic deeds keep inspiring novelists, print illustrators, and manga artists.