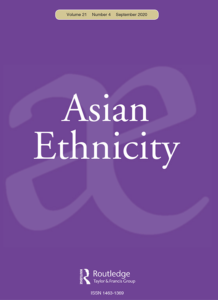 Abstract: This article attempts to cast the history of the Chinese in Thailand into a new light by framing it within the realm of emotion. Through writing the history of the Chinese from this new perspective and utilizing media such as newspapers, films, novels, etc., loaded with Chinese emotional expression towards the Thai state, society, and self as evidence reflecting emotional lives of the Chinese, we provide a preliminary outline to a history of emotions of the Chinese in Thailand. We argue that, in pursuing the assimilation of the Chinese into Thai society, the Thai state constructed an emotional regime based on the feeling of shame to govern the Chinese. The Chinese, however, found emotional refuge and liberation from the regime in transnational Chinese media and Thai-ified Sinophone literature, which played a significant role in identity politics of Chinese self-identification as neither Thai nor Chinese, but Chinese of Thailand.

About the author: Sittithep Eaksittipong was a HYI-NUS Joint Doctoral Scholar from 2012-16.