And Then the Movement Appears: Politics and Culture of Students and Scholars before 14 October 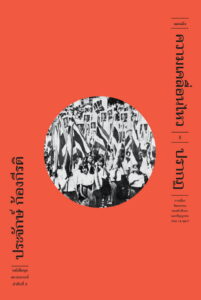 The student-led uprising on October 14, 1973 was a watershed event in Thai political history. Marking an end to a decades-long military regime, the event has been portrayed as the dawn of democracy in Thailand. Unfortunately, just a few years later, the brief period of liberal democracy ended in bloodshed with the student massacre on October 6, 1976, paving the way for the return of military rule that lasted almost two decades. Benedict Anderson’s landmark article, “Withdrawal Symptoms: Social and Cultural Aspects of the October 6 Coup,” has served as the best literature on the events. Anderson points to the rise of the Thai bourgeoisie, their ideological upheaval, and their sense of insecurity in the context of unexpected politico-economic change in a Cold War context as factors causing a swing between the bourgeoisie’s support of the student-led uprising and the return of military regime.[1] Yet, many questions are left unanswered. What made the students turn against military rule? Why did they finally fail in their quest for democracy? And how was democracy defined in the movement?

Divided into six chapters, Prachak’s book employs a cultural politics approach to deal with these questions. He meticulously explores the student-led cultural political movement leading to the uprising. Chapter one serves as a literature review on studies of October 14, 1973 and introduces his approach. Prachak then explores the socio-cultural formation of university students and their discursive network in chapter two. In chapter three, he points to the dilemma of truth control during the Indochina War. The more the military regime and its Washington ally reacted to anti-war and anti-government statements, the more widely those statements became disseminated. Chapter four then explores the import of anti-war movements from the United States and its conflation with positions against the military regime and American influence. He argues that the dissemination of this new stance through students’ discursive networks led to the emergence of “hybrid nationalism” portraying the US and the military regime as archenemies of the nation in lieu of neighbor communist countries. Chapter five deals with the decontextualized reference of leftist prints from the 1950s which served as an intellectual source for student movements, the emergence of “democratic monarch” discourse as a discursive tool delegitimizing the military regime, and the peculiar co-existence between royalist and leftist discourses. Chapter six concludes by portraying the October 1973 uprising as a result of the convergence of various conflicting discourses that peculiarly went hand in glove.

Despite dealing mainly with October 14, 1973, the book also sheds some light on the massacre in October 1976. As implied by Prachak, to a certain extent, it was the students who significantly elevated the royalist discourse, which would ironically turn against them in 1976. This book is unquestionably a tour de force and a must-read for those seeking to understand Thai politics.