With and Without Law: The System and Operation of Local Administration in the Qing Dynasty 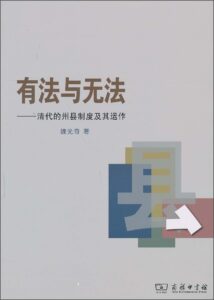 The title With and Without Law quickly catches the attention of readers. In his examination of the characteristics of Qing local administration at the county level and the problems inherent in how this system and its policies played out in reality, Wei Guangqi scrutinizes the organization and operation of both the local administration and relevant local agencies in unprecedented detail. The county level administration of the Qing dynasty was the lowest level of local administration that involved direct intervention by the central government. Wei builds his work upon an impressive base of sources, including governmental documents, local gazetteers, collected writings of individuals, local archival sources, and literary works of fiction. He follows the recent trend of incorporating county level archival sources, examining sources from the Baodi county 寶坻縣 archive, Huolu county 獲鹿縣 archive and Baxian 巴縣 county archive in order to provide a more in-depth analysis. In addition, Wei’s work incorporates theories from political science and sociology and therefore provides important perspectives for comparing the realities during the Qing with those of contemporary societies. This comparison opens new avenues for understanding the characteristics and problems of Qing local administration.

Chapters One to Six examine the system, organization, officials, responsibilities, and financial structure of Qing local administration from various perspectives. In Chapters Seven and Eight, as well as in the conclusion, Wei shifts the focus to analyze the Qing county system from a more contemporary perspective, providing his assessment of how “traditional” and “irrational” the Qing system was. Wei states that his motivation to write this book was the inspiration he gained after reading the Chinese translation of a classic work by Qu Tongzu on Qing local administration (瞿同祖, 清代地方政府, 北京: 法律出版社, 2003; Originally published in 1962 as T’ung-tsu Ch’ü, Local Government in China under the Ch’ing, Cambridge: Harvard University Press, 1962). Based on previous scholarship in the field, Wei provides lively descriptions of what an ideal local official would look like, contrasting this with the reality of not-so-ideal, corrupt officials; this is presented in such a dramatic manner that it sometimes reads as pictorial fiction or even a vivid movie script. Such treatment is made possible by Wei’s meticulous examination of a number and range of primary sources.

However, the work’s overall reliance on primary sources also reveals its shortcomings. A significant portion of this monograph is devoted to reprints of original sources unaccompanied by any further analysis by the author, and therefore the reader will sometimes encounter one-to-two page long reprints of sources without any explanation or narrative scaffolding. Moreover, some of the examples in the book are oversimplified in order to justify the author’s explanation of the Qing system as a whole, pulling the individual cases out of their regional contexts and ignoring the historical circumstances of their specific time. Moreover, the author’s dismissal of the Qing system as “without law [or illegal]” in comparison to the European legal system is questionable at best, and forces scholars to rethink how one should execute such bold comparative research projects.

Despite these weaknesses, Wei’s work provides a comprehensive, near encyclopedic, coverage of available sources on the Qing local system. Thus, this book will remain an essential foundational guide for scholars interested in the local administrative history of the Qing.