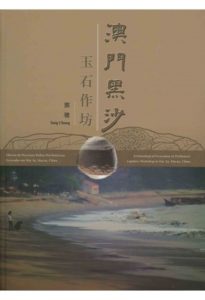 The archaeological excavation at the Hac Sa site uncovered a lapidary workshop dated back to the late Neolithic period, around 4000BP. Professional craftsmanship was found associated with the production of rings and slit rings made of crystal and quartzite. As an archaeological report, this book introduces the collaborative excavation at Hac Sa in 2006 carried out by the Center for Chinese Archaeology and Art, the Chinese University of Hong Kong; Jao Tsung-I Petite Ecole, The University of Hong Kong; and Instituto para os Assuntos Cívicos e Municipais, Macau. With the descriptions of detailed in situ contexts and the illustrations of artifacts using high resolution close-up photography, this book summarizes archaeological findings throughout the 1995 and 2006 field seasons, which makes it a milestone in the archaeological study of the Hac Sa site.

The study of stone bearings is a significant contribution of this book. As Mei Jianjun, the Director of the Needham Research Institute comments, the identification of stone bearings pushes back the use of bearings and roller-bearings for thousands of years, composing a new chapter in Chinese and even the global history of technology. Drilling techniques, especially using the tubular drill, has played an extremely significant role in ancient jade crafting and has laid the foundation of East Asian jade culture. This skillful tubular drilling technique makes it possible to produce rings and disks continuously, making the best use of raw material. The identification of stone bearings from the Hac Sa site has finally revealed how ancient craftsmen, using very simple tools, managed to bore so deeply into minerals that were harder than steel. Based on use-wear analysis, the assemblage of artifacts, and in-situ spatial distribution, the function of the stone bearings is analyzed, and a rotary device is reconstructed. These are later testified by microscopic examination of excavated stone bearings using SEM (Scanning Electron Microscopes) and systematic archaeological experiments of tubular drilling using the reconstructed device.

Based on a careful study of the function of stone bearings from Hac Sa, this book extends its horizon to the rotary motion applied in ancient East Asian jade crafting, incorporated with the history of science and technology and the formation of civilization in this region. Similar stone artifacts from different regions in China throughout the Neolithic period to the Bronze Age were analyzed; a great number of which were considered simply as stone drills or grinding tools before. Through a comparative study of use-wear and in situ contexts, this book draws a picture of the adoption of stone bearings in tubular drills of jades around China since Early Neolithic times. The spatiotemporal distribution and development of stone bearings are connected with the various characteristics of drilling holes on jade artifacts and bore-cores generated by tubular drills, reflecting the influence of the application of rotary motion on lapidary works. The author also uses multidisciplinary methods including archaeology, history, and ethnology. This book provides a new direction for the study of jades, with the perspective of ancient science and technology.

Not limited to East Asian lapidary works, this book analyzed rotary motion applied in different aspects of ancient craftsmanship, including pottery, woodworking, and metallurgy. Related materials such as potter’s wheel and wheeled vehicles from different areas around the world—including Europe, Mesopotamia, and Western Asia—were taken into account, adding a global perspective to this book. The diversity in the application of bearings to generate rotary motion is then incorporated with various types of early civilizations. The first application of stone bearings on jade crafting reflects an early symbolic system in East Asia with a worship of jades with the shape of a true circle.

In summary, this book provides an excellent example of a detailed archaeological report with initial studies. The close-up and high-resolution photography also makes it a useful database for following studies. The emphasis on the careful analysis of technological traits of particular artifacts and analogies from a wide spatiotemporal horizon constitute the outstanding significance of this book. As a starting point on the study of stone bearings and rotary motion, this book leads to a new direction where more work is certainly needed.