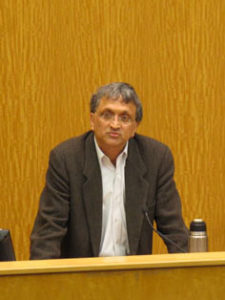 These days the rapidly rising nations of China and India are often contrasted as examples of “authoritarian” versus “democratic” paths of (capitalist or quasi-capitalist) development. But when their current political systems were first established, some sixty years ago, leaders in both countries were strongly attracted by the promises of socialism. The same was true of the reunified Vietnam in 1976, which – like China and India – subsequently embarked upon an impressive economic reform program. What did these various countries initially find so appealing about socialism? To what extent did their interpretations reflect Asian, as opposed to European, experiences and values? And what influence, if any, do such socialist legacies exert on contemporary practices in the three countries?

This roundtable brought together an inter-disciplinary group of distinguished international scholars and public intellectuals – based in India, Hong Kong, Singapore and the US — to offer their perspectives on these complex questions.

This event was co-sponsored with the Asia Center