Before Emerging from the Horizon of History: The Birth of Modern Chinese Women’s Writing 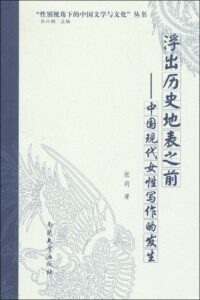 Zhang Li’s book title indicates her attempt to invoke Dai Jinhua and Meng Yue’s seminal book Emerging from the Horizon of History: A Study of Modern Women’s Literature (浮出歷史地表——現代婦女文學研究, Zhengzhou: Henan renmin chubanshe, 1989), a critical feminist analysis of modern Chinese literature. In their study of individual women writers, Dai and Meng have cogently shown how the women intellectuals in modern era consciously inscribed in the texts their marginalized gender status and their feminine “difference.” In addition to the clear resemblance in book titles, Zhang Li herself also explicitly expresses her intention to engage Dai and Meng’s work by harkening back to when and how modern women’s writing came into being (13).

Zhang Li divides her book into two parts: the first part explores the emergence of modern women writers and the second part discusses the formation of these writers’ writing styles. In the first part, she provides a detailed examination of the social and cultural contexts that gave rise to “female students” (nü xuesheng女學生) who were to be influential women writers in the May Fourth era. She contends that it was women’s physical, moral, and intellectual cultivation in the school settings that anticipated the engendering of the independent and liberated female students. In the second part, Zhang offers a wide variety of images of female students, ranging from the various portrayals of female students in the late Qing fictions to female students’ own writing on new women. Zhang proceeds to discuss how the new women became conscious of their identities as intellectuals and women writers through their deployment of the first person narrative in their writings. Aiming to demonstrate how “modern women writers entered literary ‘history’ and established their legitimate status” (265), Zhang devotes her attention to a special case involving the reception of the well-known woman writer Binxin’s works. Zhang asserts that the popularization of Binxin’s works was representative of the collective canonization of women writers’ works by later generations of readers and scholars. In the concluding portion of her book, Zhang attempts to bring to the fore the important relationship between the history of women’s literature and that of modern Chinese literature.

By foregrounding the role that “female students” played in the composition of the modern Chinese women writers, Zhang Li’s book enriches our understanding of the pre-history of the modern women’s literature (nüxing wenxue 女性文學) that was defined by Dai Jinhua and Mengyue as a rupture of the dominant culture and masculinist discourse in the 1920s. Yet Zhang fails to elucidate the complexity and dynamics of the process through which female students became modern women writers. For instance, can the development of the enlarging group of female students be readily applied to the later individual women writers who had rather unique characteristics? Second, in her introduction, Zhang assured her readers that her study focuses on the modern women writers between 1917 and 1925, but little elaboration was actually devoted to them. More important, Zhang’s study conforms to the Communist Party’s version of history that regards the May Fourth era as the turning point for Chinese women’s liberation. She relegates women’s movement in the late Qing era as subsumed to male discourses and dismisses it as being submissive. Such a teleological approach shuts off other avenues of inquiry that could have been fruitful for Zhang. For example, much recent scholarship on Chinese women’s studies has shown that women’s writing in women’s journals and other various forms of literature between 1898 and1919 proved to be active and multifarious, and was crucial to the emeregence of May Fourth women’s writing.

Still, Zhang Li has exerted a laudable effort in bringing our attention to the nature of women’s writing prior to the May Fourth era. Her rich data and detailed analysis will be instructive to those interested in this area.