A Biography of Dudgeon: A British Medical Missionary and the Medical Modernization of the Late Qing Dynasty 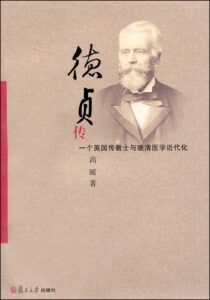 The missionaries once spread over every corner of urban and rural China. Evaluations of these people and their activities in China differ greatly, depicting missionaries either as aggressive pioneers of the Western powers, or as emissaries of Western civilization. The case study by Dr. Gao Xi brings us to a new perspective.

Dr. Gao Xi has been engaged in serious study of medical history and the history of cultural exchange between Chinese and Western medicine for a long time. The book A Biography of Dudgeon: A British Medical Missionary and the Medical Modernization of the Late Qing Dynasty (Shanghai: Fudan University Press, 2009) written by Dr.Gao, is the first comprehensive academic monograph study of John Dudgeon, and a case study of the model of “ Chinese Medical Modernization ” as well.

The book is divided into two parts with ten chapters in all, and its main theme concerns the personality of John Dudgeon. The first part deals with Dudgeon’s personal life, his development as a medical practitioner and his work as a medical missionary. The author describes the introduction of Western medicine by the medical missionary. It records the process of reflection and debate within the individual, and the influence of personal identity in relation to the question of “the value of the medical missionary”, as well as the conflict and convergence between Traditional Chinese Medicine and Western Medicine. The next part focuses on “John Dudgeon and Medical Modernization of the late Qing period”. The author analyses the medical missionaries’ practice and research activities in China in order to shape an early model of Chinese modern medicine with local characteristics, which opens up a promising prospect of Chinese modern medicine development and public health building.

The author does not confine her study to a mere biography, but also spends half of the book on research on John Dudgeon through comparison and cross-disciplinary methods. Gao Xi indicates her own opinions on prevailing scholarship while also exploring a number of issues that have been overlooked. A Biography of Dudgeon makes a major contribution to promoting cultural history, missionary history, medical history research as well as academic innovation.

From the late Qing to the present, the Chinese people’s accommodation to the West has always been accompanied by misunderstandings and contradictions. This book dispels some “paranoid ” tendencies towards the propagation of Western medicine in China.