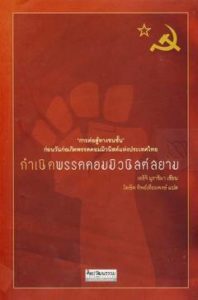 One of the most prominent Thai studies scholars in international academia is Murashima Eiji from Waseda University. To understand overseas Chinese in Siam during World War II, one of Murashima’s works, Sino-Siamese Politics: Political Movements of the Overseas Chinese in Thailand during 1924-1941 (in Thai), is a must-read for researchers and students alike. For this book, Kamnoed Pak Kommist Siam, Murashima gives the reader outstanding research with the diversity of first-hand evidence. Documents in multiple languages are used to describe and analyze the beginning of Siam or Thailand’s communist party (SCP) between 1930 to 1936. Murashima’s presentation tells a tale of political instability in Southeast Asia that was affected by forces outside the region.

The book shows that Vietnamese and Chinese communists played a crucial role in the founding of the SCP. In the initial stage, the benefit of having diverse nationalities in the party’s membership was the connection and creation of a transnational communist sphere in the region. However, a refusal to build relationships with members who were local Siamese of Chinese descent resulted in damage to the party. While Vietnamese members were more willing to work and create relationships with domestic Siamese, however, by supporting the wrong people without careful consideration, the SCP faced severe problems. Murashima’s work implies that the main issue for the SCP in the beginning stages was the lack of collective memory among Southeast Asian ethnic groups. Both Chinese and Vietnamese, even though they were born in Siam territory, were directly influenced by colonialism and imperialism from the West and the Siam central government. Although the Comintern was a transnational movement, in reality, decolonization in Southeast Asia had different results which affected people’s sentiments. Under Siam’s semi-colonialism, the central government colonized and assimilated minority ethnic groups in the country. While the Vietnamese and Chinese suffered from the process of independence and the revolution movement, the Siamese enjoyed the nation-state building project by following the Western model and becoming part of the modern international community “more peacefully.” Therefore, The Birth of the Siam Communist Party hints at the fissures in the political dimensions of the region, which indicates the consequences after the Cold War era.

A small flaw of The Birth of the Siam Communist Party is the lack of information about ordinary overseas Chinese in SCP. Numerous Chinese became SCP members as the anti-Japanese movement continued. Many pieces of evidence point out that the overseas Chinese from Siam had an essential role in propagating communist doctrine in the southern part of China. This link between a crucial historical stage that is rarely discussed in academic work might make the book more interesting. However, given the fruitful information and the complexity of the evidence, it’s understandable that the writer had to limit the scope of his study, and as a result information about ordinary Chinese is beyond the content of this book.

Nevertheless, Kamnoed Pak Kommist Siam is deserving of praise as an outstanding book in Thai studies. With information from multiple languages, Murashima leaves the future historian to re-consider the history of Thailand in the Cold War era and the role of Vietnamese and Chinese diasporas in Thailand as transnational groups which vastly impacted Thai political history.