The Birth of “Thailand” Under Dictatorship 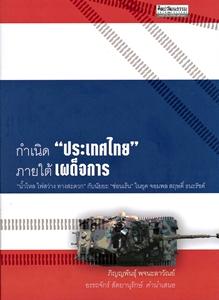 Dealing with Thailand in the 1960s, an epoch often referred to as the “development era” (Yuk Phattana ยุคพัฒนา), Pinyapan’s book makes an ambitious effort to explore how in this era Thailand was defined as a physical, social, and mental space. The book is in dialogue with two classic monographs in Thai studies: Siam Mapped: A History of the Geo-body of a Nation[1] and Thailand: The Politics of Despotic Paternalism[2].

While Siam Mapped contends that the confrontation between local and Western ideas in the 19 century transformed Siam[3] into a modern nation, Pinyapan  carries the debate to the mid-20th century. He argues that the transformation actually was fully completed only in the 1960s. Simultaneously, Pinyapan amends Thailand, a classic study on the 1960s, which mainly focuses on how military dictators utilized economic development and the revival of traditional values, including royalism, to legitimize their rule. He illuminates how people were involved in and drawn into the nation-building process, a dimension that both Siam Mapped and Thailand ignore.

Thematically organized into three chapters, the book provides fascinating insights into the construction of Thailand as a physical, social, and mental space. Beginning with the physical dimension in chapter one, the author argues that the expansion of highways, trans-provincial bus networks, and urban planning initiatives permitted state power to permeate the local level as never before. Thailand became tangible as Thais could travel across the country and experience the physical existence of fellow countrymen as a result of physical space construction. Taking his argument a step further in chapter two, Pinyapan argues that social space defined how people interact in physical Thailand. The bureaucratic network under the Ministry of the Interior, as well as the spread of mass media, including transistor radios, televisions and magazines, expanded state control and drew people into hierarchical relationships. The hierarchy between the ruler and the ruled, as well as between cosmopolitan urbanites and rural dwellers became visible as state power and information  circulated widely. Discussing mental spaces in the last chapter, the author proposes a path-breaking concept combining two regimes of time. The author states that while encouraging secular modernization based on linear progressive development, the military dictator also encouraged the revival of traditional values and institutions: a glorious past, Buddhism, and the monarchy. At a certain point, the two regimes converged and defined Thailand as a modern nation underpinned by traditional values and institutions inherited from the past. Pinyapan also devotes a small -yet notable- section in this chapter portraying how the constructed Thai space was projected to local and international audiences through international competitions and exhibitions, such as the Asian games of 1966 hosted in Bangkok.

Covering much ground, this insightful monograph also leaves some questions unanswered. First, Pinyapan seeks to put people into history, yet most of the time depicts them as passive and docile tools in the process of Thai spatial construction. The author tends to ignore conflicts that arise between the people and the state. Second, the expansion of the modern educational system in the 1960s, which the author sees as a part of social space construction, needs more exploration. The formation of modern Thai academia supported by American assistance in the 1960s gave rise to the systematic study of Thailand and led to the emergence of discourses on the country. However, this point is not addressed. Lastly, the author’s concept concerning the two regimes of time could have been made more compelling if he had taken into consideration comparative cases.[4]

Despite these shortcomings, the author sheds new light on the development of Thailand in the 1960s, with critical arguments and solid supporting details. The monograph will certainly be compulsory reading for those interested in modern Thai history for years to come.

[1] Thongchai Winichakul, Siam Mapped: A History of the Geo-body of a Nation (Honolulu: University of Hawaii Press, 1994).

[3] Before it was changed in the 1940s, the official name of Thailand was Siam.