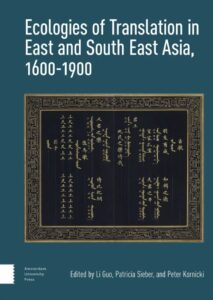 About the chapter: This chapter explores the adaptation of a Chinese Buddhist miracle tale into a traditional theatrical script in Vietnam in the nineteenth century. Contrary to the current assumption that the play Trương the Butcher performed in Buddhist ceremonies derives either from literary Sinitic novels or folktales of Vietnam, this chapter argues that the proximate source for this play was a Chinese miracle tale entitled ‘Zhang Yin’(from around the eleventh century), associated with the spread of the Diamond Sutra. By discussing the similarities and dif ferences of the original Chinese version and its Vietnamese adaptation, this chapter contributes to the research on the ecologies of translation of Chinese popular literature into the Vietnamese theatrical corpus, particularly those associated with Buddhist practices.

About the book: This ground-breaking volume on early modern inter-Asian translation examines how translation from plain Chinese was situated at the nexus between, on the one hand, the traditional standard of biliteracy characteristic of literary practices in the Sinographic sphere, and on the other, practices of translational multilingualism (competence in multiple spoken languages to produce a fully localized target text). Translations from plain Chinese are shown to carve out new ecologies of translations that not only enrich our understanding of early modern translation practices across the Sinographic sphere, but also demonstrate that the transregional uses of a non-alphabetic graphic technology call for different models of translation theory.

About the author: Nguyen To Lan was a HYI Visiting Scholar from 2013-14 and a Coordinate Research Scholar in 2015.