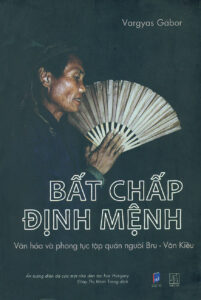 This book is a systematic study focused on the culture and customs of the Bru people, an ethnic minority in central Vietnam. The book by Vargyas Gábor is structured in 13 chapters and leads readers in a documentary-style narrative through research on Quang Tri Province. The book is a valuable document on the society of a mountainous ethnic group living in modern times. The Bru are an ethnic group living on the border of Laos and Vietnam. The ethnic group is little known in the world’s ethnographic and linguistic system. Due to the closure of the Vietnamese government during the French Colonial Period (1840-1945), to the Indochina War (1945-1954), and particularly during the Vietnam War when the border areas were sensitive (1954-1975), the Bru people were not studied. The Bru people are an indigenous ethnic group of Southeast Asia, so this study is considered unique to the time.

The 13 chapters and visual appendices clarifying Bru culture, customs, and rituals show their life cycle in a comprehensive way. Gábor clarifies the identity of the Bru people in chapter 1, with a “compromise of power” against more powerful groups to survive. This chapter shows an important feature of the Bru people and indicates the differences between the Bru people before and after the rise of powerful empires. During this turbulent period, other indigenous Vietnamese people chose to either fight, migrate to Cambodia, or become a diaspora deep in Laos.

From chapters 2 to 12, Gábor researches in depth the culture, customs, rituals, and folk songs of the Bru people comprehensively. Gábor studies the “identity” of the Bru people in the following areas: national politics, psychology, measurement systems, and farming methods along with rituals, gods and altars, how space is used, funeral rites, rituals of worship, rituals prolonging life, shaman costumes, tools, and songs. The author also builds cultural pairs such as: ancestors with forests, earth – heaven, above – below, clean – dirty, and current life and the afterlife through funeral rituals. The author notes that Bru life is considered destined to survive due to its adaptability in political life. Their survival is attributed to not only adapting to nature to survive, but also adapting politically with empires. The Bru people also compromise with Gods through the shaman system. The shamans are the mediators connecting man with the gods and are responsible for guiding the Bru community in organizing life according to divine guidance. In chapter 13, Gábor expresses concern about the future existence of Bru culture in contemporary life with the opening of the border between Vietnam and Laos and the rise of a strong border economy. Through the 13 chapters, Gábor has created a clear portrait of the Bru ethnic group within Vietnam’s ethnic system, not to mention the clearly codified spiritual, material, and cultural life.

Vargyas Gábor is considered the “last dinosaur” because of his ethnographic fieldwork of an isolated ethnic group in Southeast Asia. This is a valuable study adjacent to previous studies on indigenous people living in the mountains of Trường Sơn range (Central Highlands) such as those written by Georges Condominas, Jaques Dournes, A.G. Haudricourt (France), and G.C. Hickey (USA). Otherwise, it seems that this area is almost forgotten by the outside world.

Gábor produces anthropological fieldwork and meticulous analysis of aspects of ethnic life both materially and spiritually from the sharp perspective of a cultural anthropologist. He successfully joined the community in its fullest sense. He ate, lived, and slept on the bamboo floor next to the fire with no private space. Furthermore, Gábor faced the challenge of only eating a few bowls of rice with food coming from the garden, forest and river per day, consuming absolutely no sugar and coffee. He speaks Bru and participates in community activities for research without the need for translation. Aso, he followed the Bru people into the fields while the fields were burning and still smoldering and smoky, despite being discouraged due to the many dangers. Gábor spent more than 10 months living with the Bru almost totally isolated from modern life, and lost more than 20 kg. I consider this to be the most exciting period of research life because it is what other anthropological researchers dream of.

Vargyas Gábor clarified indigenous cultural life based on theories set in the political and globalized context. The author successfully identifies the Bru as an indigenous people with a strong history, culture, and philosophical system in their spiritual lives. Vargyas Gábor not only offers scientific contributions to anthropology, but also introduces the Bru language system to the world. This book can be seen like a slow-motion documentary about the memory of a people who have lived far away from modern society.

* Original is the Hungarian publication “Decolva az alkerulhetetlennel” (2008) and translated into Vietnamese (2018).