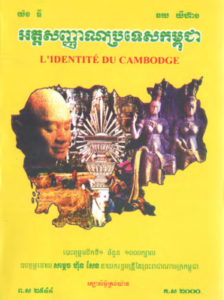 Cambodian Identity, prefaced by Prime Minister Hun Sen, is part of a nation-building project to define the identity of Cambodia, to promote unity among the Khmer (Cambodians), and to instill patriotism. Written in Khmer language, it is one of only a few good books of this kind. It defines identity as the characteristics that distinguish living beings (humans/animals) from non-living things. The authors identify five elements at the core of Cambodian identity: Land, history, culture and civilization, state and governance, and society. Each chapter of the book examines one of these core elements.

A merit of this book is that it has the potential to help unify the Khmer people after decades of severe war. In addition, it is one of the very few books written in the local language by a Cambodian scholar that succinctly but comprehensively captures different aspects of Cambodia, including geography, culture, political and state governance, natural resource management, and society, covering the ancient past along with the contemporary period. It is widely readable for diverse audiences ranging from academics and policy elites to the general public. It is conveniently available in local bookstores and is a recommended reading for anyone who would like to learn about Cambodia.

Nevertheless, the book has limitations, which readers should keep in mind. First, the authors might have given more thought to the concept of identity, as it is the main theme of the book. Defining five elements as the core of Cambodian nationhood, for instance, seems arbitrary and requires further explanation, as the list could easily be expanded. Why not speak of eight core elements, as in discussions of Thai nationhood?  Furthermore, a book that is part of a nation-building project understandably makes reference to the greatness of ancient times. Yet it would have been beneficial to acknowledge that governance systems, boundaries, sovereignty, society, culture and livelihoods, among other things, were of a rather different nature in ancient Cambodia (6,000-2,500 BC) compared to the contemporary nation, which ultimately is a product of the modern system of states dating back to the Treaty of Westphalia in 1648. Last but not least, the key elements of Cambodian identity outlined in the book reflect mainstream culture, sidelining ethnic minority groups and indigenous tribes living in the Cambodian territory.