Capillary Function of Power: Ideology, Scholarship and Mentality during the Qing Period 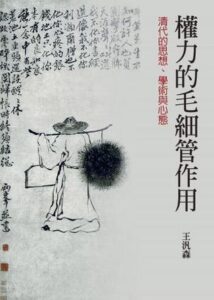 Capillary Function of Power is an important collection of works, revolving around the evolution of mainstream ideology from the Ming to the Qing Dynasty. The book can be divided into four parts. The first part discusses the decline of metaphysics, trends in textual research of the classics, transitions in moral and political thought, and the rise of the idea of “rule by rites”. All of these are main themes of ideology during Ming-Qing period. In the second part, consisting of case studies, the author examines literary inquisition during the Qing period, drawing on Michel Foucault. Wang argues that literary inquisition created extreme political pressures, giving individuals a sense of self-containment. Furthermore, various powers involved in literary inquisition worked as checks and balances. Thus literary inquisition had a profound influence in Qing period. In third part, the author uses two cases to argue that realism and simplicity are characteristics of ideology in the middle of Qing period and influence ideological transitions in the late Qing period. The last part discusses ideological trends from the Jiaqing to the Daoguang period.

Qing historians have paid much attention to the important issue of literary inquisition. In the chapter, whose title is the same as the book’s, the author argues that under the political pressure generated by literary inquisition, individuals, including book authors, editors and book collectors, would delete sensitive information and actively hide the books. This behavior reflects individuals’ sense of self-containment and self-discipline. Thus the author defines this phenomenon as an ideological campaign, whose function is for state power to thoroughly control individuals’ ideology.

Capillary Function of Power is not a quick and easy read. The book is brimming with information and ideas. It clearly shows the evolution of main themes of Qing ideology. In addition, the author pays much attention to the values promoted by the Qing state at different times, and to the evolution of state-society relationships. Therefore, the book invites its readers to carefully rethink such issues, even when the reader might disagree with some of the author’s conclusions.