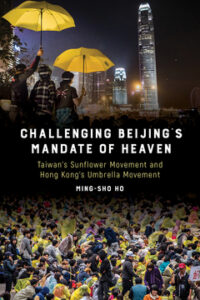 About the book: In 2014, the Sunflower Movement in Taiwan grabbed international attention as citizen protesters demanded the Taiwan government withdraw its free-trade agreement with China. In that same year, in Hong Kong, the Umbrella Movement sustained 79 days of demonstrations, protests that demanded genuine universal suffrage in electing Hong Kong’s chief executive. It too, became an international incident before it collapsed. Both of these student-led movements featured large-scale and intense participation and had deep and far-reaching consequences. But how did two massive and disruptive protests take place in culturally conservative societies? And how did the two “occupy”-style protests against Chinese influences on local politics arrive at such strikingly divergent results?

Challenging Beijing’s Mandate of Heaven aims to make sense of the origins, processes, and outcomes of these eventful protests in Taiwan and Hong Kong. Ming-sho Ho compares the dynamics of the two movements, from the existing networks of activists that preceded protest, to the perceived threats that ignited the movements, to the government strategies with which they contended, and to the nature of their coordination. Moreover, he contextualizes these protests in a period of global prominence for student, occupy, and anti-globalization protests and situates them within social movement studies.

About the author: Ho Ming-sho was a HYI Visiting Scholar from 2018-19.