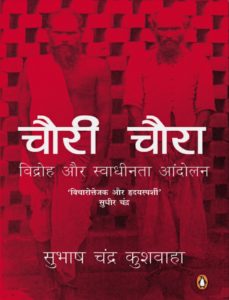 Subhash Chandra Kushwaha’s monograph Chauri Chaura is an account of a small but pivotal moment in modern Indian history—the Chauri Chaura riot. The incident took place at Chauri Chaura, a small town in Uttar Pradesh (North India), on February 4, 1922 when some peasants burnt a police station killing twenty-three policemen. The event has a particularly peculiar status in Indian history because it was identified as a ‘criminal’ act not only by the British colonial government but also by mainstream anti-colonial nationalist leaders. The book is a detailed account of the events that led to the riot and its aftermath.

Kushwaha attempts to retrieve the official version of the event through government judicial records and responses of national leadership. To recover the peasants’ side of the story, he engages with local folk songs and contemporary oral accounts of the event. Employing oral history as an archive for an event that took place in 1922 is an innovative method to study subaltern resistance. His methodology is not very different from that of Shahid Amin (1995) who also wrote about the incident in Event, Metaphor, Memory: Chauri Chaura, 1922-1992—a nuanced work that shows how national history is made.

Kushwaha divided the work into three sections. The first section discusses the events leading to the riot such as peasant condition and Gandhian politics. The second and third section examines the details of the riot and its aftermath respectively. Despite the various challenges with archive materials, Kushwaha successfully weaves the narrative while identifying local actors who faced criminal charges and the toll the incident took on their families. Interestingly, he produced a mercy petition of men convicted in the riot. These primary source materials are consequential, and they raise some pertinent questions: who wrote these petitions for the illiterate peasants? Can these judicial records be trusted completely? What was the original language of these recordings? Such fundamental questions need to be addressed to contemplate if these petitions could be a good source to retrieve the past of the convicted men.

Similarly, to explain the features of the socio-political environment in the 1920s, he highlighted the critical influence of the Russian Revolution on Indian laborers. If the connection was developed, it could have become an excellent example of how profoundly the history of a small market town in colonial India was entwined with global developments. Yet, stylistically, the monograph suffers from certain limitations such as not proceeding in chronological fashion and an absence of a much-needed concluding reflection in the end.

Nevertheless, it is important to acknowledge Kushwaha’s arduous effort to write about an under-researched event in Indian history and also the initiative by Penguin India to publish the monograph in the Hindi language. Using native language (Hindi or vernacular) to pursue regional histories, while maintaining the credibility of historical facts, may become instructive in illuminating local histories within the homogenized national past.