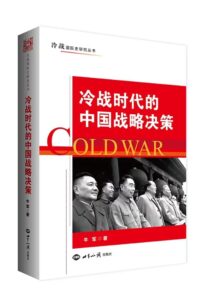 In China, “who is doing diplomacy” and “how the decision-making system works” are relatively secret and complex issues in the study of China’s diplomacy during the Cold War. There are a large number of monographs on a particular event or level of China’s foreign policy-making during the Cold War, focusing on changes in the Sino-Soviet Alliance or the Sino-American rapprochement, or discussing China’s economic Cold War strategy, military strategy and other certain levels of strategy.[1] However, this is the first monograph on China’s strategic decision-making by Chinese scholars examining the interaction between China and the Cold War, which establishes a new paradigm for the study of China’s diplomatic decision-making in the Cold War period.

The author makes full use of the declassified archives, documentaries, biographies and memoirs of relevant leaders of the Chinese government, and refers to some declassified files of Russia and the United States, deeply and systematically analyzing China’s strategic decisions over the past 40 years from the establishment of the People’s Republic of China to the end of the Cold War, including alliances, limited wars, international crisis management, large-scale foreign military assistance, and all-out war preparation and balance of power strategy. By examining six cases including the  “Sino-Soviet alliance”, the “Korean War”, the “shelling of Kinmen”, the “Vietnam War”, the “Sino-American rapprochement”, and the “Normalization of Sino-Soviet relations”, this book reveals the main direction of development and basic characteristics of China’s strategic decision-making in the Cold War era. Among them, the author’s research on China’s crisis management during the Vietnam War and the relevance of China’s withdrawal from the Cold War through the normalization of Sino-Soviet relations are particularly impressive.

The author has a deep and long-term understanding of the various cases and familiarity with the history of the Chinese Communist Party and China’s revolutionary history. The author examines why and how China’s strategic decisions and the Cold War interact, the subsequent consequences, and how this interaction shapes the Chinese people’s world outlook and their strategic thinking at critical moments. Secondly, he uses the basic principle of strategic decision-making that “the essence of strategy is management” to guide the case analysis, and reveals how the “consultation-consensus” system was operated in China’s decision-making. Finally, he reveals the influence of traditional political and historical knowledge and revolutionary temperament on China’s “strategic decision-making” through the idiom and decision-making behaviors of Chinese leaders. It shows that Chinese leaders are not narrow ideological fanatics and adventurers skilled in power struggle, but are conscious rational decision makers.

Finally, as the author says, the six cases in this book focus on military security issues. However, in order to understand the full panorama of China’s strategic decision-making during the Cold War, more studies are needed from the perspectives of economy, foreign cultural propaganda and China’s united front policy towards the Third World. In addition, since the Chinese government archives post-1965 have not yet been declassified, the historical scene described by the author based on the official history, biographies and memoirs, will still need to be reevaluated once those files are released.