The Chinese Model of Consensus Decision-making: A Case Study of Healthcare Reform 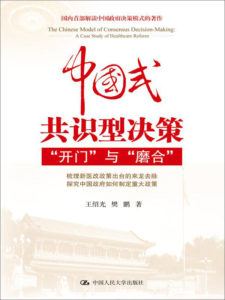 Wang Shaoguang and Fan Peng’s book deciphers the policy-making process of healthcare reform in China. Policy-making in China is often treated as a black box. Existing literature has labeled the process as personal dictatorship, bureaucratic pluralism, fragmented authoritarianism, consultative government, etc. The authors of the book challenge the existing frameworks and raise a new concept of consensus decision-making to characterize the policy-making process. They use the healthcare reform from 2002 to 2009 as a case study to support their argument. Healthcare reform is an important topic that has a significant impact on the livelihood of virtually every Chinese citizen. This book thus not only makes theoretical contributions, but also has significant practical implications for understanding Chinese politics and society.

The core argument of the book is that China has formed a “consensus” policy-making and decision-making process for important public policies. The consensus decision-making process has two key characteristics, the first of which is an “open-door” for the opportunity to participate. The second is the “mohe” for the communication mechanisms. The authors argue that “open-door” means allowing interest groups to raise their ideas and suggestions in policy-making, with leaders also reaching out to understand public opinion. In contrast to the western style of “checks and balances”, “mohe” means that communication points in decision-making are not veto points, but rather “input points” and “deliberation points”. The stakeholders in such a system will use negotiation and coordination to find common ground and eventually reach a consensus. Thus, in the Chinese model, it would be much harder for interest groups to determine the policy-making process than in the Western system.

The book starts with an introduction of the healthcare reform and a theoretical background in Chapter One. In Chapter Two, the authors introduce the historical background for the healthcare reform. The authors illustrate that although China had great achievements in healthcare issues since the establishment of the PRC, the healthcare system developed severe problems since the period of reform and opening-up. After the reform, rural cooperative medical care and urban health care provided by work units largely collapsed. The public discontent towards the health care system—particularly the public health crisis caused by SARS in 2003—made health care reform an urgent issue.

In Chapter Three, the book introduces the five stages of policy-making for healthcare reform. The first stage was the setting of the policy agenda, which occurred prior to June 2006. The second stage (July 2006 – February 2008) was the design and selection of potential proposals that involve various departments and stakeholders. The third stage, internal discussion within the establishment for the final proposal, lasted from March 2008 to September 2008. The fourth stage was public consultation and ran from October 2008 to November 2009. The final stage was the announcement of the policy, which happened from December 2008 to March 2009. The authors argue that the structure of policy-making can have six circles. At the highest level are the supreme decision-makers, including the CPC Central Committee General Secretary and the Political Bureau. The second level is the coordinating institutions among ministries, which are typically referred to as the “leadership team”. The third level is policy-making departments, which in this case is sixteen departments. The fourth level is interest groups, followed by the policy research community and ordinary citizens at the fifth and sixth levels.

Starting from Chapter Four, the authors introduce how different actors got involved in the policy-making process. Ordinary citizens expressed their opinions through the internet, media, and by directly submitting written statements, which the government did pay attention to, summarizing the main points. Chapter Five covers input from the policy research community within and outside the government. Chapter Six studies how interest groups influenced the policy-making process, such as by summarizing opinions within the profession and then submitting such opinions to decision-makers through various channels. Chapter Seven introduces how policy-making departments incorporated opinions from diverse actors and had horizontal coordination. Chapter Eight studies the coordination among the ministries, in particular the leadership teams. Chapter Nine studies the influence of the supreme decision-makers.

This book offers rich details on the policy-making process based on the case of healthcare reform. It is conceptually innovative and empirically rich. It offers a valuable perspective for understanding Chinese politics. Moreover, the authors make great efforts to introduce other cases in the Western context, which adds a comparative perspective to the book.