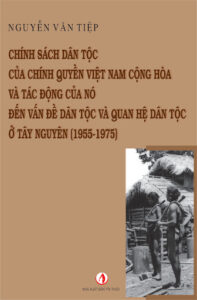 Studying the Republic of Vietnam (RVN) ethnic policy and assessing its multifaceted impacts on the political, economic, social and cultural life of the ethnic minorities in the Central Highlands Vietnam during its short two decades of existence (1955-1975), this book is an attempt to fill the gap in the existing literature regarding the ethnic issue, national identity, ethnic-racial relations, perceptions of ethnic relations among elites and masses in Vietnamese ethnography, Vietnamese anthropology, and modern history of Vietnam. The book also contributes to new scholarship on RVN nation-building which challenges the existing scholarship focused on the role of the U.S. in nation-building and treated South Vietnamese governments as backdrop, incompetent, less legitimate.

The book consists of 4 core chapters with an introduction and a conclusion. In the first chapter of the book, the author (i) discusses concepts and theories relating to ethnic conflict theories, functionalism, acculturation, pluralism, human ecology theory and (ii) provides an informative overview of the natural conditions, demography, ethnicity of the Central Highlands. The author obviously has his own ideological approach. He is apparently on the side with Marxist-Leninist ideology and Ho Chi Minh thoughts on ethnic issue, race and ethnic relations (p.22-31). Chapter 2 presents the evolution and transformation of the ethnic policy of different regimes in Vietnam’s history – from the Cham people, Champa feudal dynasties, Vietnamese feudal dynasties, the French colonial rule, and the RVN government. Building on the works of earlier scholars of Vietnamese ethnography, anthropology, and history as well as archival works, the author offers us some interesting interpretive insights along the way into the evolution of the ethnic policy in different periods during the RVN era- from the First Republic, the Interregnum, and the Second Republic period. The next chapter deals with the impacts of the RVN ethnic policy on the socio-economic life of the ethnic minorities in the Central Highlands. The final chapter, chapter 4, evaluates the impacts of the RVN ethnic policy on the educational and cultural life of the ethnic minorities in the Central Highlands.

The book’s strengths, such as they are, lie in making effective use of archival information and official South Vietnamese government publications from the Vietnam National Archive Center No.2 in Ho Chi Minh City (Saigon) (p.294-311) as well as a wealth of secondary sources. The book is well supported by an impressive range of primary sources, including top-secret, secret government reports, texts, Vietnamese-language magazines and newspapers. Another fascinating point highlighted in the book is that besides the shortcomings of the RVN ethnic policies the author evidently admits some of the progressiveness of such policies and somewhat describes RVN as a functioning regime with efforts in establishing institutions, building capacity, and facilitating state control over the Central Highlands (p.160-167, 236-238, 276-278, 279-287). These are analyses that some traditional Vietnamese scholars of ethnography and history would not accept, as they would not agree on the multi-dimensional nature of the RVN government.

Like many ambitious studies, the book also invites critical reflections on important analytical problems as the author notes (p.11). First, although the book is rich in its discussion of the RVN ethnic policy and its multifaceted impacts on the political, economic, social and cultural life of the ethnic minorities in the Central Highlands, it might have benefited from more detailed works of ethnographic descriptions and analyses by Hickey (1982a), Van (1986, 1989), Evans (1992), Salemink (2003), Hardy (2003), Chi (2006), Po Dharma (2006), Davis (2015), Goscha (2016), Bac (2019). For example, it would have been interesting to see how the presence and the involvement of the Americans in the Central Highlands through many projects to improve the lives of ethnic minorities in the Central Highlands, including programs for economic development, language, culture, and social welfare, finally turned out to be a threat to the nation-buildings of the RVN in this strategic area.

Second, while the author notices and poses questions concerning the role of the French in making the political resistance of the Montagnards (Central Highlanders) conceivable after 1954, he barely touches on how the French policy in the pre-1954 period, especially during the Domain of the Crown (Hoàng triều Cương thổ/Domaine de la Couronne/皇朝疆土) period (p.78-88), accidentally created the shared sense of belonging or the sense of nationhood among the Central Highlanders and finally led to the emergence of a modern identity among some highland tribes in South Vietnam. In fact, the Central Highlanders’ modern identity, combined with Protestant liberal thought which spread in the Central Highlands during decolonization, to some extent has made the BAJARAKA Movement (1958) and later the United Front for the Liberation of Oppressed Races (Front Unifie De Lutte De La Races Opprimee /FULRO) (1964) rise. Third, absent from the author’s assessment of the failures of the RVN ethnic policy during the First Republic to the Interregnum period as well as the rise of the BAJARAKA Movement and the FULRO is the hostile policy of neighboring countries in which some Khmer Krom and Champa people in Cambodia have supported and provided shelter for the Central Highlanders. Last but not least, in terms of translation, the translation of two important terms from the Rhadé language (Klei Êđê) into Vietnamese are inexplicably mistranslated on page 64: Mtao Pui should be translated as “Vua Lửa or Thủ Lĩnh Lửa” and Mtao Ea as “Vua Nước or Thủ Lĩnh Nước“. Also, there is a misquotation of Paul Nưr (1966) in the general assessment section (p.100-101).

To conclude, despite these caveats, this book should be of interest to scholars and students of Vietnamese ethnography, Vietnamese anthropology, modern Vietnam history, the Central Highlands of Vietnam, RVN, the Cold War.