Code-switching and style-shifting by Pakistani pupils: A study in a Tokyo suburb 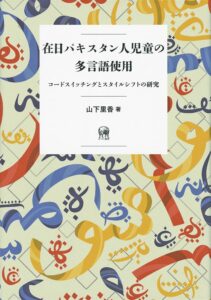 Reviewed by Yuichi Asai (Tokyo University of Agriculture and Technology)

This book is a brilliant study on multi-lingual language use among Pakistani pupils in contemporary Japan. In particular, based on vigorous fieldwork in a mosque classroom in a Tokyo suburb, the author depicts how Pakistani pupils construct their relative social relationships with other participants in the classroom and their community, primarily through analyzing their discursive acts, such as “code-switching” and “style-shifting” among their three dominant languages, i.e., Urdu, English, and Japanese. The book thus ethnographically reveals how the sociocultural context of the immigrant community emerges and transforms through their multi-lingual communicative process.

Specifically, the first half of the book demonstrates how often Pakistani pupils use their inherited language, i.e., Urdu, in relation to English as their learning language and their daily use of Japanese in the community. The results indicate that while the frequency of Japanese and Urdu use was nearly equivalent to each other in 2007, the use of Japanese dramatically increased in relation to Urdu in 2009. Accordingly, the author illustrates that the children’s language choice is firmly attributed not only to their language proficiency or the language use of adults in the community but to their individual social relationships with others in and out of their community. The second half of the book further focalizes their micro-level language use and explores how Pakistani pupils construct their social relationships through discursively taking “stances” with other speech participants and to the ongoing speech act itself. In particular, the author illustrates how children engage in various ways of code-switching to align with their teachers in Urdu and also dis-align with other children in Japanese using its polite form, augmenting social distance and imposing their negative evaluation on them. The book further reveals that while Pakistani pupils effectively utilize “quotations” in Urdu to appeal to the authority shared in the Urdu-speaking community, they switch their language or shift their speech styles from Urdu to various registers in Japanese and English. Some of those registers are often extracted from TV programs and thus function to create and transform a noble interactional context within Urdu speaking community.

Successfully incorporating an ethnographic approach to sociolinguistic analysis, this book offers an insightful examination and a thick description on the nature of multilingualism among immigrant Urdu-speaking children in Japan. The author also exemplifies how the sociocultural structure and practices in the immigrant community shape their language use and how language is used and mobilized to reformulate the social context of the immigrant community. The study is precious in that beyond the research of language per se it sheds light on the intersection of language and its social context, revealing that language is inherently social and illuminating the cultural importance language epitomizes for their social life with Pakistani pupils and their immigrant community.