The Cold War and Academics: Chinese Studies in the United States, 1949-1972 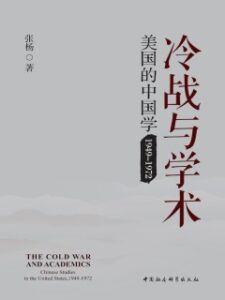 The Cold War is a historical phenomenon that not only created a new international political system, but also deeply rearranged the respective social, cultural and educational ecology of the participant countries. In recent years, the complex interactions between political and academic circles in the United States and the Soviet Union have increasingly become the focus of Cold War historiography.[1] Prof. Zhang Yang’s Cold War and Academics: Chinese Studies in the United States (1949-1972) examines the political tendency, academic thought and fate of American Chinese studies experts under the background of changes in Sino-US relations, trying to understand how the Cold War shaped the development of Chinese Studies in the United States.

Merging Cold War history along with the histories of American higher education and Sino-US relations, Prof. Zhang uses an interdisciplinary approach to study the emergence of American Chinese Studies during the Cold War and the role of American Chinese experts in the formulation and implementation of American China policy. It is important to note that he makes full use of original archives such as the Asia Foundation, the Ford Foundation and the United States government. This innovative research reveals “the impact of political funds and political operations on academia and the tension between politics and academia.”

The content of this book can be roughly divided into two parts. The first three chapters deal with Chinese Studies in the U.S during the period of Sino-US confrontation. The last three chapters discuss Chinese Studies during the Sino-US rapprochement. The first chapter studies the “Great Purge” of American traditional sinology as a discipline in the context of the reversal of Sino-US relations after 1949. It mainly examines the establishment of the American Cold War Consensus and the containment policy towards China, the McCarthyism implemented towards the traditional sinologists and the decline of traditional research in Chinese Studies. The second chapter examines how the U.S. government gradually established politically oriented Chinese Studies institutions as a part of Area Studies development with government funding and under the guidance of the National Defense Education Act of 1958, and thus guided the production and application of Chinese knowledge. The third chapter provides a political analysis of the academic debate among China experts, the factional split among Chinese studies experts, and the struggle between the “China Lobby” and the “Red China Lobby.”

The fourth chapter discusses the creation of Chinese Studies in Asia after the Second World War, mainly taking the activities of the Asia Foundation and John K. Fairbank as examples to explore the history of the extraordinarily active influence of the United States on the academic research process in Asia and the responses of various countries and regions in Asia. The fifth chapter focuses on the positive role of the Chinese expert community in the adjustment of the U.S. China policy and the competition among the community of Chinese Studies experts. The sixth chapter summarizes the evolution of the relationship between American academia and politics after the Second World War, analyzing the debate among professional academics or public figures about the research goals of American Chinese Studies. The author examines the national concept, academic ethics and personal choice of elite intellectuals, as well as the complex interplay between the government and academia.

Prof. Zhang makes use of the archives of major foundations in order to create an impressive study of the unprecedentedly close alliance among the administrative agencies, private foundations and academic institutions in the U.S. during the Cold War. The author challenges the myth of complete academic autonomy and freedom in the U.S. and encourages us to rethink the existing assumptions about the relations between academia and politics in the West. She also explores the role of the United States in the development of Chinese Studies in Asian countries such as Japan and India, which lays a foundation for further research. The book also enriches the current research on the history of Sino-US relations by discussing the internal division of the China expert community in the U.S. and the debate on China policy and its impact on the Sino-US rapprochement. However, the author seems to lack a clear definition of the concept and the scope of Chinese Studies in the United States. She also disregards previous studies on the subject when providing the historiography of Chinese Studies in the U.S. In addition, the author pays too much attention to the funding sources of scholars’ research projects, rather than systematically analyzing the internal logic of the academic work of the China experts in the U.S.

Thirty years after the Cold War, there has been an endless stream of media comments and reports on the so-called “new Cold War era.” Many draw parallels between these time periods and wish to provide simple solutions. Those who boast about the victory of the West in the Cold War easily forget about the limitations on hegemonic power, the unsustainability of alliance politics in the modern world and the damage it created for the ties within the scholarly community. This research allows us to thoroughly understand how the Cold War shaped U.S. domestic politics, academic and public discourse. The book sheds light on the perception of the Cold War by contemporaries and helps us to understand the so-called new Cold War power dynamic. Given that every scholar of Sino-U.S. relations now has to choose between politics and academic freedom, this book seems particularly timely and worthy of scholarly attention.