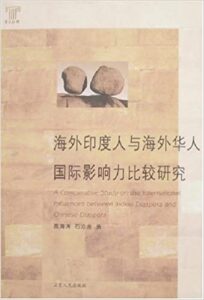 With the rise of China and the emergence of India as two Asian giants increasingly dominating not only the economic but also geo-political global landscape, it has become imperative to make comparisons between these countries from all perspectives. It is well known how overseas Chinese have played a fundamental role in the economic miracle that has been the last 30 years of reform and opening up. India however woke up to this strategy late but has shown some initiative in recent years in mobilizing its diaspora community to participate in domestic economic development.

In this context, the book co-authored by Professors Jia Haitao and Shi Cangjin (published in 2007 by Shandong People’s Press) argues for the importance of a comparative study between the diaspora communities of these two countries as well as their global influence in promoting their respective economies. The authors believe that diaspora communities play a very important role in not only the economic development of a country but also in the growth of international influence in an increasingly globalized world. Moreover, a comparison between the diasporas of the two most populous Asian giants will have great significance in the area studies, bilateral relations, national policies and foreign affairs of the two countries.

The introduction discusses the lack of this kind of comparative study not only in foreign scholarship but also by academia in the two countries, and how this book is an attempt to fill this void. The first chapter begins by theorizing the concepts of globalization and migrant citizenship. It further talks of the tide of international migrations in the era of globalization and its political, economic and cultural influences, the special characteristics of Chinese and Indian migrants. Finally, it debates the international influence of China and India over their respective overseas communities. Chapter two is dedicated to describing the history and specific processes of Indian migrations abroad and their distribution all over the world in terms of population. In Chapter three, the authors similarly write about the history of Chinese migrations, their distribution of population all over the globe, and their growing economic clout. However in the Chinese context, the authors also highlight the important position that people from Guangdong and Fujian have in overall Chinese migration. Chapters four and five go on to focus on the connections that the Indian and Chinese overseas communities have with their homelands and their influence on their respective economies. Chapter six is dedicated to new changes occurring in the overseas Chinese society and its possible influence on the future development of Chinese society, including prospects for its political unification.

The authors examine the differences in the definition of overseas population by the governments of the two countries. India considers any and all people who live abroad as overseas Indians while China only considers those who have lived for long periods of time or have citizenships or domicile in foreign countries as overseas Chinese (hua qiao). However, the authors do not clarify the differences between the two terms used by Chinese scholarship to describe overseas Chinese, hua qiao and hua ren—or even hua yi (as has been defined by Wang Gungwu) for better understanding the nuanced differences between these categories. While highlighting the role played by overseas Chinese in helping the motherland in times of crises such as the Xinhai Revolution, the Second Sino-Japanese War, and the struggle for Liberation, they fail to recognize the similar contributions made by overseas Indians in India’s struggle for independence, such as the role of the Gaddar Party and overseas Indians’ participation in the Indian National Army organized by Subash Chandra Bose.

Despite some obvious flaws in the production, as in not consistently providing English translations for transliterated foreign names, spelling mistakes in English names and lack of citations when providing figures, this book does a fair job in charting the detailed histories of Indian and Chinese migratory trends in all periods of history and even mentions some often neglected groups such as the Anglo-Indian migration after India’s independence in 1947. Besides mentioning the similarities of the diaspora communities of the two Asian giants, the authors also provide the contrasting policies that the respective governments have formulated at different times. For those who are first-time readers on scholarly writing about Chinese and Indian diaspora, this book helps shed light on many aspects in detail. It clearly provides a historiography of the diaspora trends of both the countries along with the current governmental policies and conditions of these two large communities individually as well in comparison with each other. It well historicises the economic and social changes that both countries have undergone since their respective independence from foreign domination and attempts to unravel the comparisons of their respective overseas communities in the current 21st century framework of perceived competitiveness between the Chinese dragon and the Indian elephant.