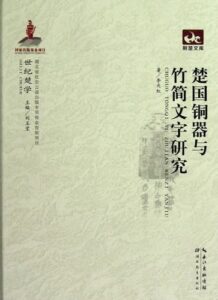 In September 2012, Professor Li Tianhong of Wuhan University published her new book 楚國銅器與竹簡文字研究 (On The Study of Chu Writing on Bronze Vessels and Bamboo Strips). Before that, I had the pleasure of reading several chapters of her manuscript draft, including a chapter about the E Jun Qi tally;[2] another on the bronze vessels from Zhujiaji, Anhui; and one about the bamboo-strip manuscripts housed in the Shanghai Museum. I found her book very helpful in giving a clear overview of these materials, and would therefore like to introduce her work to Western colleagues who study early China, especially those scholars interested in excavated texts.

This book is a comprehensive overview of the study of excavated ancient Chu writings,[3] covering mainly bronze inscriptions dating from the middle and late Western Zhou Dynasty (c.1046-771 BCE) to late Warring States period (475-221 BCE), as well as bamboo-strip manuscripts from the Warring States period. It is divided into two parts, with eighteen chapters in total. The first part (comprising five chapters) deals with five collections of bronze vessels bearing inscriptions, including the E Jun Qi tally and the bronze vessels from the tomb of Marquis Yi of Zeng; the second part (comprising thirteen chapters) then discusses sixteen collections of bamboo-strip manuscripts, such as the administrative documents and divination records discovered in Baoshan tomb no. 2, the well-known collection of philosophical manuscripts excavated from Guodian tomb no. 1, and the large cache of Shanghai Museum manuscripts. It also introduces fifteen smaller collections of Chu bamboo-strip manuscripts that currently remain unpublished, reflecting the research project Professor Li has been directing to edit five such caches of unpublished Chu strips. Moving chronologically, in the order these collections were excavated or acquired, Li provides a brief introduction to each collection, describing the physical features of the materials (this is mainly for the bamboo strips), as well as the categories and contents of their texts; outlines the research which has already been conducted on these writings; and moreover provides several detailed examples of how particularly thorny research questions were articulated, debated, and finally resolved usually using information gleaned from new materials. For instance, such debates included the issue of how to interpret the phrase “shiri視日” in the context of the Baoshan manuscripts. The term, which in the texts refers to an official in charge of lawsuits, was later revealed by materials from Guodian to mean literally “overseer of the day,” i.e. the person on duty for that day.

As an expert in Chinese paleography, and in the study of Chu bamboo-strip manuscripts in particular, Li should be commended for the balance she has struck between her objective review of secondary scholarship, and the way in which she supplements current debates with further evidence, while in some cases providing her own opinions. She offers her own well-argued position in quite a few places, such as when she explains how scribes often confused “zhi之” [(possessive particle)/ him/ her/ it], “xian先” (earlier; before) and “ji及” (and) due to these characters’ graphic similarity;[4] when she deciphers the characters “zhou 肘” (elbow) and “wen文” (culture);[5] and when she discusses the physical features of the Shanghai Museum bamboo-strip manuscripts.[6]

Another point worth mentioning is that Li addresses some of the newest issues in the field today, such as characters influenced by Qi-style script in the Guodian Chu manuscripts,[7] newly identified character forms or clerical mistakes in Shanghai Museum manuscripts, and more. Her book keeps pace with latest research trends in this field, making it a great resource for any scholar interested in the study of unearthed Warring States texts.

In summary, Prof. Li Tianhong’s On The Study of Chu Writing on Bronze Vessels and Bamboo Strips not only compiles and introduces dozens of collections of Chu bronze inscriptions and bamboo-strip manuscripts, but also includes a detailed review of the secondary scholarship as well as the author’s expert insights on these exciting new paleographic materials. Furthermore, the inclusion of fifteen collections of unpublished Chu strips makes her book an important resource for scholars seeking to learn more about these materials. By consulting this book, readers are treated to a clear and concise overview of these discoveries and the previous scholarship conducted on them, and are at the same time introduced the newest directions being taken in Chinese paleography today. Li’s work is an invaluable guide to the study of Chu writing, which in just the past few decades has rapidly become one of the most popular and important specialties in Chinese paleography.

[1] I would like to express many thanks to Wang Xue for her help in writing this review, and to Christopher Foster and Philip Gant for helping me with the editing.

[3] Chu was a long lasting regional state located along the middle and lower Yangtze River valley from the time of Western Zhou to 223 BCE.

[7] Qi was another major regional state and a rival of Chu during both the Western Zhou and the Eastern Zhou periods, and was located in present-day Shandong province.