Constructing Legal Science in Taiwan: The Integration of Knowledge in Europe, the United States, Japan and China 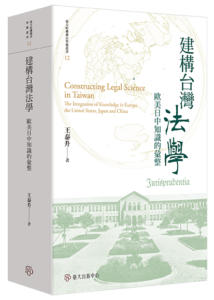 About the book: Inspired by the disciplines in history, law, and sociology, this book links jurists, legal discourses, and political and social contexts to describe how the knowledge of legal science in Europe, the United States, Japan, and China has been compiled to shape the legal science in Taiwan which have experienced colonial, authoritarian, and democratic regimes from the late 19th century to current 21th century. The author thus proposes further reforms to transcend the historical fetters. In addition, from an East Asian perspective, this book depicts the line of legal knowledge transmission from Meiji Japan to Republican China, and then to post-war Taiwan, as shown in the treatises for introducing legal science. In order to create an treatise on the introduction of legal science for the new generation of Taiwanese lawyers, it is advisable to replace the old with the new when using the German-style theory of legal interpretations, and to incorporate the methodology of the application of law in the Anglo-American law, and more importantly to face, rather than ignore, the legal practices in current Taiwan for the purpose of reconstructing a Taiwanese version of the introduction of legal science.