Court Rites and Music during the Early Qing 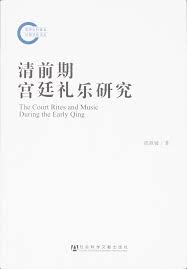 Reviewed by Gu Songjie (School of History and Culture, Minzu University of China)

In recent years, the so-called “new Qing history” based in the United States has presented new ideas, perspectives and methods that have affected historical research around the world, including mainland China. Court Rites and Music during the Early Qing is an example of this trend. Rites and music is an important imperial rule. This book systematically traces the development of the types and uses of music employed by the Manchus from the era of the Manchu leader Nurhaci to the end of the Qianlong reign. It analyzes the relationship between political culture and court rites and music and reveals that the political need for rites and music was the foundation and starting point for the cultural policy of the Qing court.

The book begins with a comprehensive literature review of works of music history since 1915. The discussion of court rites and music was confined to the field of musicology for a long time, and the majority view was that “the palace music of the Qing dynasty was a meaningless behavior.” However, research conclusions have been transformed in recent years thanks to Western scholars who have situated the palace music of the Qing court in political and cultural context. The author of this book continues this stream of thought to answer questions related to the background and significance of rites, and their relationship to the state and ritual system of the Qing Dynasty.

This book includes four chapters. The first chapter narrates the general situation of Qing court rites and music before the Qing conquest of 1644 from three aspects —— “ritual”, “Han Lubo guards of honor” and “ceremony”, which were ignored by past research. The second chapter discusses how Manchu rulers chose Han Confucian ceremonies while the Manchu Temple of Heaven sacrifices were gradually discontinued in the Shunzhi period. The ceremonies of the Manchus were strongly impacted. The third and fourth chapters separately elaborate the development of Confucian traditional rites and music and the reuse and formulation of the Manchu rites. The regeneration and construction of this content and the significance of the use of the content originated from the political and cultural background. “Determining the rites and formulating the music” was something that had to be done at the beginning of each new dynasty. It was an important way for the monarch to make clear to Heaven and all the common people that his new regime was both legal and legitimate. It also symbolized the reestablishment of the ruling order.

The characteristics of the Manchus are highlighted in the discussion of the Qing court music, which was different from those of other dynasties. The author skillfully utilizes textual criticism to explore the political wisdom of Manchu rulers and compare the historical material in different periods and different characters. At the same time, Court Rites and Music during the Early Qing also provides a reference for the study of Manchu documents. It is full of new information and ideas. For example, most previous scholars assumed that the Manchu people did not begin to absorb the Confucian rites until after they had conquered China through the Shanhai Pass in the period of Emperor Shunzhi. That was not the case, however. In the period of Chongde, Emperor Hungtaiji had already begun to imitate various kinds of Confucian rites from the Ming Dynasty. Another example is the assertion by musicology researchers that the “Fourteen melodies” (十四律) were created by the Kangxi emperor. Although this assertion is absurd, the author affirms that the “Fourteen melodies” still carried deep political significance.

In short, Court Rites and Music during the Early Qing is a valuable and readable book, even for readers who have no knowledge of music. This book advances understanding of late imperial Chinese civilization.