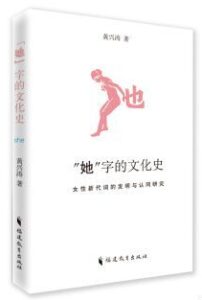 Early-twentieth-century China witnessed a surge of invented or reformulated terms and concepts that reinterpreted long-standing gender norms or principles in various ways. Contested neologisms, such as “nüjie女界(women’s world/women),” “nü yingxiong女英雄(female hero),” “guomin zhi mu国民之母(mother of the citizen),” “nü guomin 女国民” (female citizen), and “yingci 英雌 (heroic female),” not only signified the unprecedented roles that women of the time assumed or imagined, but were indicators of the complex processes of social, political, and cultural change in modern China. Indeed, Huang Xingtao’s painstaking examination on the history of a Chinese female pronoun in his “Ta” Zi De Wenhuashi—Nüxing xin daici de faming yu rentong yanjiu (A Cultural History of the Chinese Character “Ta (She)”—On the invention and identification of a new female pronoun) demonstrates how the invention and identification of a new word could be inextricably intertwined with the socio-cultural politics. Huang believes his exploration of the intricacies woven within the Chinese female pronoun “she” follows distinguished historian Chen Yinke’s (1890-1969) self-conscious idea that “interpreting a single character is writing a cultural history.”

In order to denote the cultural and historical meaning of “ta,” Huang’s book provides a richly textured and illustrated description of the formation of a new female pronoun in May-Fourth era. However, as Huang clarifies in the beginning of the book, though it was not until the May-Fourth period that the character “ta” had gained its modern meaning, the differentiation between “he” and “she” in Chinese had appeared early in 1870s. The imperative to invent a Chinese equivalent to the female pronoun “she” in English was facilitated by the intensified language and cultural interactions between China and the West from the late nineteenth century onwards. “Ta” Zi De Wenhuashi is cogently detailed in mapping the evolution of the contested debates on the character “ta” that culminated in the May-Fourth movement period. Huang views April 1920 as the turning point of the history of “ta”. In 1920, Liu Bannong 刘半农 (1891-1934), a leading figure in the New Culture Movement, proposed in his “Issues on the Character ‘Ta’” the invention of a new Chinese character as the third-person female pronoun. In April 1920, heated discussions over the reform or abandonment of “ta” ensued.

The chapters of this book are organized around competing discourses on “ta.” In Chapter One, Huang argues that the nomenclature of third-person pronouns, and of the female pronoun in particular, was necessitated by the dilemma that existed in translation between Chinese and western languages—namely English. Chapter Two investigates how “ta” was first proposed by Liu Bannong and how his contemporaries experimented with several other neologisms so as to properly translate “she” into Chinese. “Ta” was by no means the sole legitimate rendition, rather it was merely one of the wide range of alternatives. In Chapter Three, Huang delineates how “ta” was introduced to writing practices prior to April 1920. Literary practitioners used “ta” in a broad spectrum of texts, ranging from novellas, essays to poetry. Concomitantly, another character “yi (伊)” was predominantly adopted by many famous writers in the 1920s. “Yi” would perpetuate its rivalry with “ta” in the decade to come.

Chapter Four lavishes its attention on the contentious arguments over the legitimacy of using the newly invented “ta.” Initiated by a die-hard opponent with the penname of Hanbing (寒冰, frozen ice), the “ta” debates culminated dramatically in April 1920. After being savagely attacked in Hanbing’s serialized essays, “ta” was viewed as semantically and phonetically inferior to the character “yi”. Chapter Five discusses how “ta” was treated in gendered perspectives. The prevalent feminist concept of “equality between men and women” justified the rejection of “ta”. In this chapter, Huang invokes another gender-specific neologism “yingci (英雌 female hero) ” as a footnote to explicate how gender and politics were embedded within words and terms. Chapter Six situates the discussion of female pronoun “ta” within the linguistic system of third-person pronouns.

Chapter Seven explores how “ta” was circulated and identified in different genres of writing. For example, Xiaoshuo yuebao (小说月报 Fiction monthly) became a famous locus where many renowned writers chose “ta” as the third-person female pronoun in their writing. Chapter Eight concludes with Huang’s analysis on how “ta” ultimately gained currency and replaced “yi” in the 1930s. He asserts that the overriding factor for “ta’s” takeover lay in its homophony with the Chinese third-person male pronoun “ta (他, he).” Huang also problematizes the perception that the invention and identification of “ta” was “an inevitable result of a Western hegemony in [Chinese] culture” (p. 154). In addition, Huang does not fully concur with the view that “ta” was a mere product of westernization and modernization. Rather, he contends that “ta” coincidentally overlaps and represents westernization and modernization.

The great strength of Huang’s study lies in its fully documented and panoramic narrative of debates on the character “ta” from the May-Fourth Movement era to 1930s. Some theoretical and conceptual issues, however, could have been addressed more carefully and thoroughly. For example, in Chapter Five, Huang intends to explain how the notion of “gender equality” empowered opponents of “ta” and three major views opposing “ta” developed. His clear-cut categorization of the loosely connected debates from different time, rather than elucidating, instead tends to oversimplify the complexities and tensions imbued within the discourse. In narrating the third and the most influential view on choosing “yi” over “ta”, Huang touches slightly on the voices of feminist activists. He claims that “some feminists even publicly opposed the use of ‘ta’” (p. 79), yet no further evidence or detail was provided. Similar neglect was also tangible in his treatment of modern female writers in Chapter Seven. He points out that some influential May-Fourth generation female writers, such as Bingxin 冰心 (1900-1999), Luyin 庐隐 (1898-1934) among others, were enthusiastic proponents of “ta” in their writing practices. Therefore, he argues, in stark contrast with the feminists’ collective and Funü Gongming’s (妇女共鸣, Women Resonance) sweeping castigations of “ta” in the journal in which ‘ta’ was “perceived as the embodiment of victimized women,”  these female writers “were not like those narrow-minded feminists in Funü Gongming” (p.127). The journal Funü Gongming was founded in 1929 and it would hardly possible for the female writers in 1921 to be influenced by the views in 1929. Despite the anachronistic error, Huang failed to explain to full length what led to the contrast between female writers and Funü Gongming feminists.

Second, by inserting the transformation of another new term “yingci” in his discussion of gender and politics and words/terms, Huang asserts that “ta” has been constantly challenged by the modern notion of “gender equality” while “yingci” was nothing more than a linguistic invention. I was not convinced that the neologism “yingci” was a linguistic product and a mere outdated term from the hindsight. Rather, “yingci” was a unique category of women that many female writers self-appointed from the Late-Qing to early-Republic era. Not only did this publicly promoted and uniformly revered term embody an ideal of womanhood that was closely connected with national salvation, it also represented a new heroic identity that women of the time could assume to engage with national politics. Furthermore, his evocation of Funü Gongming’s objection to “ta” in the 1930s contradicts his conclusion that “ta” had won a complete victory in 1930s. More careful and in-depth discussion on this contradiction would provide readers with more glimpses on the tensions or dynamics in the processes of identifying “ta.”

Third, Huang’s analysis of discourse on “ta” seems to endorse a teleological model of progress in which the reduction or elimination of other third-person female pronouns became an inevitable result of History. His comparison between “ta” and oft-adopted female pronoun “yi” is particularly obvious in this regard. As for the fact that noted writers, such as Qian Xuantong 钱玄同 (1887-1939) and Zhou Zuoren 周作人 (1885-1967), unanimously showed favoritism for “yi” rather than “ta,” Huang concludes that despite the writers’ enthusiasm towards ‘yi,’ “neither their dismissal of ‘ta’ nor their preference of ‘yi’ corresponds to history’s last choice of ‘ta’ (p. 30).” Such a statement leads one to think that the cultural history of the Chinese female pronoun is in fact the history of the victor “ta.” As it stands, these hurried and unexamined conclusions cause more confusion than clarity and detract from his impressive material research.

In all, Huang has presented an informative book on the cultural history of the newly-invented character “ta.” His endeavor inspires readers to reflect on the deep historical and socio-cultural meanings hidden within words and terms we take for granted in the present day. Researchers of literary, linguistic and historical spheres will benefit from this author’s interdisciplinary perspectives as well as his expertise in collecting rich research material.