Dai Zhen and Chinese Modern Philosophy: From Philology to Philosophy 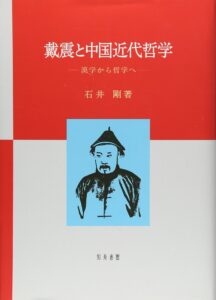 A stereotypical introduction of Dai Zhen (戴震, 1724-77) would be as follows: a person who launched evidentialism in the Qing dynasty and criticized Song-style metaphysical pedantry. Accordingly, Dai Zhen is depicted as a pioneer who cast a premature seed of modern (or, simply, Western) science before the overwhelming advent and proliferation of Western civilization in China. In this monograph, Tsuyoshi Ishii, professor of the University of Tokyo, deconstructs this conventional portrait of Dai Zhen and his philosophy to reveal the richness and complexity of the man and his thought. First, Ishii meticulously probes the making of Dai Zhen’s philosophy and its reception. Then he proceeds to delineate yet other forms of Chinese philosophy in later scholars’ works that originate in Dai Zhen’s philosophical ideas. As a result, the bulk of this book is devoted to clarifying how later scholars such as Zhang Taiyan (章太炎, also known as Zhang Binglin 章炳麟, 1869-1936), Liang Qichao (梁啓超, 1873-1929), Wang Guowei (王国維, 1877-1927), Liu Shipei (劉師培, 1884-1919), and Hu Shi (胡適, 1891-1962) received and developed Dai Zhen’s philosophy.

The author gives the following table of contents:

One of the main conclusions of the book is that, contrary to common understanding, Dai Zhen’s work should not be considered as a short-lived proto-science in China nor as a simple antagonist of Song learning. Instead it should be seen as a critical synthesis of various scientific and philosophical resources that were available to Dai Zhen, both Western and Eastern. This diverse character of his philosophy enabled later scholars to develop variations of Dai Zhen’s ideas. To show these points in detail, Ishii carefully explores many different aspects of Dai Zhen’s works (and the work of other scholars) ranging over various fields such as ethics, politics, metaphysics, mathematics, and philosophy of language. In the course of the discussion, one is confronted with a rather large question, that is, the place of Han learning in the history of Chinese thought. Nevertheless, as is clear from the introduction, Ishii’s interest is more in illuminating the immense diversity within this philosophical stream than in defining it. One who delves into this rich book will realize that the idiom “God is in the details” is applicable to this case as well.

One who reads the introduction will immediately notice that this book reflects a recent trend in Chinese philosophy in Japan developed under the influence of Western sinology, that is, to concentrate more on visualizing argument structure than giving commentaries on lexical and historical background. This is welcome especially for a general reader who is not a sinologist or a devout amateur of Chinese philosophy. Nevertheless, the sheer bounty in the book presents a challenge. As one may have already noticed, the book does not follow a temporal order nor an immediately apparent logical order. In terms of exhibiting the diversity of the subject, the book is to be applauded. However, one who is not already familiar with the relevant topics may occasionally find it difficult to follow the complicated lines of arguments. This is the reason why I find it regrettable that that the book lacks argument summaries. Since the book is voluminous (approximately 400 pages including one chapter that is about 90 pages in length) and dense, it would have been more accessible if it had concise maps or outlines in places. There is a preface, introduction, and conclusion, but they do not clarify the connections of the chapters enough.[1]

All in all, the author should be celebrated for succeeding in locating Dai Zhen’s philosophy within a broad historical point of view. I believe there is much to learn from this book especially for scholars who work in the field of Chinese philosophy.

The book also contains two versions of the summary, English and Chinese, and an English table of contents.

[1] In the preface, Ishii discusses broad topics such as the relationship between Western philosophy and Chinese philosophy. The discussion is readable but I do not see how this is necessary or helpful for understanding following chapters. In the conclusion, Ishii seems to introduce new topics rather than answer the questions raised in the preface and conclude what has been argued.