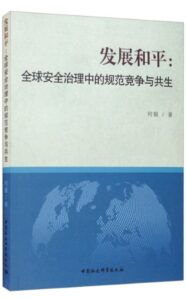 The United Nations (U.N.) is the largest inter-governmental organization, and a crucial venue for global governance and international peace operations. The rise of China and its comprehensive national strength is great deal of debate vis-à-vis U.N. peace operations. The book Developmental Peace: Norm Competition and Symbiosis in Global Security (Fazhan heping: Quanqiu anquan zhili zhong de guifan jingzheng gongsheng) by He Yin is an absorbing account of Beijing’s changing policy towards the UN peacekeeping, and in the right direction to further problematize the normative competition in the U.N. system.

The author elucidates the transition of U.N. peacekeeping to peacebuilding to the 21st century peace operations, and asks an ontological question in the beginning of the book — whose norm matters in global governance? The author explains that a peace norm called ‘liberal peace’ existed in peacebuilding discourse, what is then the Chinese norm and what will happen when the Chinese norm encounters the ‘liberal peace’? The book is divided into nine chapters to discuss the above questions.

The content of the book can roughly be divided into three parts. The first three chapters discuss the conceptual and theoretical framework as well as the definition of the U.N. peacekeeping and peacebuilding. The next two chapters deal with ‘liberal peace’ championed by the West (Europe and North America) and ‘development peace’ being advocated by China. The last three chapters are a comparative study of these ‘two peaces’ in the context of peacebuilding in Haiti, Liberia and East Timor. The author then concludes that both institution building and economic development are essential for building sustainable peace, therefore, both liberal peace and development peace can coexist to make a cooperative contribution to peacebuilding.

The author argues that Beijing’s policy on the UN peacekeeping evolved with China’s national identity, and there exists a Chinese approach (Zhongguo fangan) to peace operations — ‘developmental peace’ (fazhan heping), the term that he claimed to have coined himself. Contrary to liberal peace, developmental peace advocates political and social stability by strengthening existing government in the host country to amplify economic development. Also, the author says that foreign aid in developmental peacebuilding comes without any political strings attached.

The book announces out loud that the norm of liberal peace has some flaws, which can be complemented with Chinese developmental peace, and a rising China in the 21st century wants to play a bigger role, as a norm contributor, not just a norm taker. This study also aligns with Beijing’s official rhetoric, for example, the English version of the China’s white paper on peace missions mentions the phrase ‘peace and development’ 25 times.

The author, through case studies, further argues that while the peacebuilding in Liberia reflects some degree of coexistence of ‘two peaces’, the Haiti peacebuilding process does not allow developmental peace to play any significant role (p.144). And in the case of East Timor, where liberal peace was dominant, still it had adopted ‘consensus democracy’ (gongshi xing minzhu) rather than ‘confrontational democracy’ (duikang xing mizhu), making the coexistence of these two peaces possible.

Overall, this book is a convincing account to make the point that developmental peace is Beijing’s approach to U.N. peace operations. Still, the Chinese style of developmental peace stresses on strong state-led economic development, it does not pay attention to democracy and human rights; it prioritizes state security over human security. The question then arises on the sustainability of the peace in post-conflict zones. However, the author quite systematically introduces rising China’s developmental peace. While the book covered three case studies, some details on other peacekeeping operations and a more persuasive analysis can be anticipated in future study.