Discourse on the History of Chinese Pictorial Printmaking 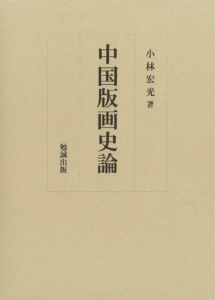 Kobayashi Hiromitsu’s Discourse on the History of Chinese Pictorial Printmaking discusses the history of Chinese pictorial printmaking from the Tang Dynasty (618-907) to the Qing Dynasty (1644-1911) from various art historical perspectives and with an examination of its relationship to popular culture. Printmaking is a medium that cannot be overlooked in terms of the dissemination of visual information. The emergence of print represents a historical revolution in the writing process—shifting from one-of-a-kind pieces to that of identical mass production—which also significantly contributed to the spread of studies, religion and art to the public.

Part one of this book is entitled “Classic Prints of the Tang, Song, and Yuan,” which illustrates the development of printmaking along with Buddhism by addressing early Buddhist prints and Yuzhi Bizangquan (御製秘蔵詮Imperially Composed Explanation of the Secret Treasures).  The later part discusses the religious classics Sanlitu (三礼図 Book of Rites) and  Linuchuan (列女伝 Ancient Virtuous Ladies), and argues how they adapted traditional illustrations and new artistic expression to make printed texts, which would be reprinted later in a style that reiterated the past. The first part of the book also examines practical, everyday books like Shilin Guangji (事林広記 Vast Records of Forest Matters).

Part two is entitled “Illustration of Vernacular Literature: The Genesis of a New Genre of Pictorial Print.” This section focuses on popular storybooks in the vernacular with numerous illustrations, and discusses its development along with active commercial publication. This section also discusses the relationship between draftsmen, carvers and publishers, and examines the leading print schools: the Jian school建版, the Jinling school 金陵派and the Anhui school 安徽派.

In part three, entitled “Artists and Printed Works,” the author discusses the relationship between famous painters during the Ming and Qing dynasties and printmaking. The first chapter, on Qiu Ying 仇英, addresses the problem of forgery, and how printed illustrations attributed to him were later made into paintings, resulting in a pseudo-Qiu Ying style. The author next discusses the artist Chen Hongshou 陳洪綬, mentioning his style and the establishment of the artistic status of printmaking designed by him. The chapter on Xiao Yuncong 蕭雲従 goes on to discuss visualization, including interpretation of the verses. The next chapter, “A short history of Qing figures,” discusses how pictorial expressions reflected the changing times and states of society. The last chapter considers the development of a  Sino-Western style in the Suzhou 蘇州 landscape or cityscape prints.

As mentioned above, this book is not just a chronology of Chinese pictorial printmaking, but also examines it from various viewpoints such as the historical background and the relationship between the design illustrators and the publishers. In addition to the detailed discussion, the book also contains about 900 figures of prints owned by libraries and art museums in Japan, China, Europe, and America; thus it is of importance to consider the history of Chinese pictorial printmaking both on its own as well as its influence on Japan and other countries.