Documenting the Reproductive Revolution in China, 1978-1991 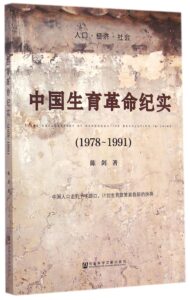 The one-child policy is one of the most controversial issues in post-Mao China. Arguably curbing the oversized population and averting an ecological crisis, this policy infringes on reproductive rights, worsens relations between cadres and the masses, and has affected and will affect generations of Chinese citizens. Recently, Chen Jian, a retired official who once worked at the National Family Planning Commission, wrote a book on China’s one-child policy, delving into the black box of its formulation.

The book begins by reviewing family planning in China in the 1970s, a period that has not been extensively discussed in the scholarly literature. The author shows that the moderate policy of getting married at a later age, spacing pregnancies out, and bearing few children (晚稀少) was a remarkable success. The birth rate dropped from 33.43‰ in 1970 to 18.21‰ in 1980, and the total fertility rate during the same period declined from 5.81 to 2.24. Moreover, this progress was achieved primarily through voluntary compliance rather than political coercion or economic punishment.

Chapters 2 and 3 detail how the central leadership made a radical turn in policy in the late 1970s and early 1980s, permitting couples to have only one child (一孩化). The author acknowledges that Song Jian’s cybernetic population projections provided scientific support for the one-child policy but does not consider this factor as decisive. Instead, he argues that policy-making was dominated by the ideas of Deng Xiaoping and Chen Yun, who believed that tight control of population growth was critical to China’s modernization. At the same time, Hu Yaobang and Zhao Ziyang preferred the more temperate proposal of allowing two births per couple. However, this proposal failed to solicit support from the National Family Planning Commission and most provincial leaders. The author also contends that, contrary to the prevalent viewpoint, the Central Committee of the Communist Party’s 1980 open letter implicitly criticized the harsh one-child policy. Yet, ironically, some cadres exploited this letter to foster even stricter implementation.

The fourth and fifth chapters examine two policy proposals in the 1980s that aimed at relaxing the one-child policy. The first was an experimentation that allowed each couple to have two children with certain spacing between births (二胎加间隔). In addition to analyzing Liang Zhongtang’s pioneering work in Yicheng county, Shanxi province, the author shows how those working within the government brought about similar proposals and how Hu Yaobang and Zhao Ziyang welcomed them. Nevertheless, these successful pilot projects did not spread to other regions, let alone to the national level. Another policy change concerned rural families whose first child was a daughter (独女户). In the early 1980s, the central government decided that such households could have a second child, given China’s traditional culture and the necessity of sons for farm labor. For fear that this policy might be interpreted as expressing the idea that daughters were inferior to sons, the government phrased permitting single-daughter families in rural areas to bear a second child as permitting families “with real difficulties” to do so. At the local level, this ambiguous expression was usually misinterpreted as forbidding a second child with few exceptions. It was only at the end of the 1980s that this policy was made explicit.

The remainder of the book evaluates the impacts of the one-child policy on population growth, human rights, and local governance. It also discusses the lessons we can learn from the process of its formulation and puts forward several policy suggestions.

Overall, this book provides an extensive review of the one-child policy from an insider perspective, with a focus on the tug of war between hardline and softline proposals. However, likely because the author was still remote from key decision-makers, he does not offer a full account of some critical questions. For instance, why did the two-child pilot project starting in the mid-1980s not become national policy until 2015? Why was it inconclusive in the 1990s and 2000s? And what factors led the top leadership to ultimately adopt the two-child policy after three decades of experimentation?