The Domestication, Raising and Ritual Use of Pigs in Ancient China 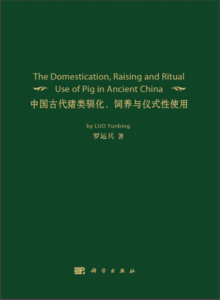 As one of the earliest and most significant domestic animals in ancient China, pigs have played a key role in Chinese economic life, as well as in political and ideological areas. Luo’s study of the domestication and feeding of pigs in ancient China and its influence not only reveals the developmental process of technological history, but also explores the social function and symbolism of pigs in ancient China, which could help deepen our understanding of Chinese social history.

Based on research on pig remains, this book places emphasis on quantitative analysis, and conducts multi-dimensional systematic research on pig remains of ancient China, by applying the theories and methods of zooarchaeology and archaeology and relying on the means and achievements of relevant disciplines. For this purpose, Luo mainly focuses on four aspects: the identification standards of domesticated pigs (chapter two), the domestication process in ancient China (chapter three), the early history of raising pigs (chapter four) and the ceremonial use of sacrificing pigs (chapter five).

The identification of whether pig remains are wild or domesticated is the basis for further research. However, the relevant methodology in domestication proves weak. Combined with the practice of Chinese archaeology, the existing standards of domesticated pig identification are systematically summarized and evaluated in chapter two. Luo then proposes a series of standards based on China’s reality, such as morphologic observation, structure analysis of the age at death, pathological and diet analysis, etc. At the end of the chapter, the emphasis is placed on the joint use of multiple standards to minimize the risk of drawing conclusions from a single standard.

The domestication of pigs in prehistoric China has been a hot topic in Chinese zooarchaeology. Based on straightening out the evolution of the pig species, evidence of the appearance of domestic pigs in pre-Yang Shao China (9000- 6900 BP) is summarized in chapter three. Meanwhile, regional differences among sites are noted, along with the time, feature and pattern of pig domestication.

Since the Yang Shao Period (6900 – 5000 BP), pig husbandry in most regions of ancient China has reached a certain scale. The fourth chapter of this book focuses on the early development and strategies of pig breeding from the Yangshao to the pre-Qin period (before 221 BC). The relationship between pig husbandry and crop farming is also examined. Luo goes on to suggest that the different developmental processes and patterns of pig raising among regions in ancient China were influenced by local culture and the availability of natural resources, which confirms the theory of “passive development.”

Pigs also played an important role in various ceremonies in ancient China. To explore the symbolism and ritual function of pigs among different contexts, chapter five details pig remains from ritual activities and classifies them, which is innovative. Based on this discussion, the diachronic changes and patterns of pig sacrifice in different regions can be further examined. According to the evidence collected, special pig burial customs originated in many areas and several regional centers were formed.

Based on Luo’s doctoral dissertation, this book is full of innovation. It is the most complete collection and systematic interpretation of pig remains excavated from Chinese archaeological sites. Moreover, Luo dates the origin of domesticated pigs in China back to about 9,000 years ago by using multiple methods. Second, this book demonstrates the southern and northern differences between pig group characteristics in prehistoric China and concludes that the domestic pig in ancient China had an indigenous polycentric origin. Two modes of its origin, the “protogenesis” and “regeneration,” are proposed. Third, the impetus of the origin of the domestic pig, ritual sacrifice, is emphasized. Finally, this book explains the existing phenomenon that there was the possibility of exchange between different pig groups in the pre-Qin period. In summary, the original, innovative and integrated ideas of Luo’s book are of significant academic value.