Early China: The Making of the Chinese Cultural Sphere 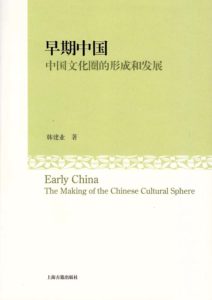 The origin and formation of Chinese civilization has always been a key topic attracting the attention of researchers who study Chinese archaeology and history. Since the 1980s, researchers have conducted studies covering issues such as chronology, and the process and characteristics of early civilization origins. However, due to a lack of clear definitions of terms such as “Early China,” these studies are being called into question by western scholars. In response to the query as well as to refine previous research, Han has devoted himself to the study of early China, presenting several pioneering concepts (“Early Chinese Cultural Sphere (早期中国文化圈)” and “Early China in culture (文化意义上的早期中国)”(2005:65-71)). Following Yan’s (1987; 2009) and Chang (1987)’s footsteps, Han defined the time range when early China originated culturally, as well as the areas where these early archaeological cultures were distributed. He not only conducted a close examination of the continuity of Chinese civilization, but also emphasized the role that the central plain played during the formation of early Chinese civilization. The work he did in this book is a significant progression in conducting a systematic analysis led by archaeological evidence. As Yan pointed out in the preface (Han, 2015:3), Han “has collected all available archaeological data as far as possible, marked by pottery combination, and conducted extremely detailed cultural genealogy analysis.”

To be more specific, the highlights of this book include the following:

First, it stressed the interactions among different cultural systems during the formation of early China based on case studies. In Chapters 2-5, Han used typology to present various developmental patterns of archaeological cultures in different culture zones (Northeast China, the Yellow River and Yangtze River basins and South China) from the Paleolithic age to the late Shang Dynasty. He further demonstrated cultural exchange and integration in these regions. His deep understanding of each archaeological cultural zone makes his integration work more valuable.

Besides, Han also values the role of geographical features and landscapes played in shaping early civilizations in China. Combining results of geographical studies, Han identifies associations between culture developmental stages and environment change in Chapter 7. This provides an objective perspective in evaluating the rise and fall of a culture.

However, several issues still merit further discussion. First, Han conducted an elaborated integration of cultural genealogy analysis results. But it showed less innovation and improvement on methodology because such work has almost been completed in the last century of China. The evidence from physical anthology and molecular anthropology are expected to be discussed as significant new clues on ethnic group fusion and disintegration. Also, the book may sometimes rely on “descriptive writing” which lacks an explanation for phenomena. For instance, instead of drilling down to the motivation and reason, he rests on describing the appearances of regional archaeological culture, such as cultural communication, transmission, as well as expansion or collapse.

In conclusion, Han’s book contains clear logic and abundant material evidence. It is worth reading and is insightful for those who are interested in early China studies.