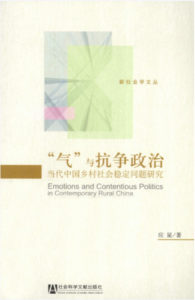 “Qi” (气) is one of the most important explanations for the occurrence of contentious politics or collective actions in China, from Ying Xing’s perspective. In this book, he links the Chinese traditional concept of “qi” with the contentious politics derived from political science theory. The meaning of “qi” is contested and it is hard to find a similar word in English. It could mean “angry” or “justice”, or be translated as “emotions” as the title suggests. It implies a sense of emotional judgment towards the overall political participation in China. Through devoting himself to fieldwork in rural China, Ying tries to find the mechanism of collective action in contemporary China through embracing localized knowledge, rather than following the dominant western discourse.

The arrangement of the book follows the ecological cycle of “qi”, including the origin, release, and cohesion, of “qi”. We can understand the process of “qi” in the following example. Mr. Zhou and other villagers were asked to relocate to another place due to the establishment of a hydroelectric station area in southwest China. Multiple factors, including being detached from their own land, consciousness of local officials’ corruption, prior experience in organizing collective action, and the emergence of grassroots leaders, all together gave rise to “qi”, which later led to collective action. Different from rights consciousness, the peasants in China fought not for rights written by law, but for dignity and social recognition (page 118). Local officials applied harsh repression which further irritated Zhou and his followers. Driven by “qi” though, the collective action was sustained. In this case, Qi first represented the fear and anger towards the local officials’ corruption and social deprivation. Second, it became the fuel which sustained collective action when confronted with repression by the government.

Ying brings the Chinese traditional discourse back to political theory. Through years of valuable and sorted empirical materials, Ying argues that for most rural resistance, the peasants are self-constrained. They ask for monetary compensation, and then self-regulate to avoid crossing any red lines. Therefore, responding to personal grievances becomes a wise choice through which local governors can maintain social stability without resorting to force. Ying proposes a new model of conflict management by balancing interests while, at the same time, responding to personal grievances.

The book, as well as Ying’s prior publications, contribute to a changing picture of life for peasants in rural China. The author links individual grievance with the deeply-rooted social and political structure. However, the definition and clarification of “qi” remains unclear from the reader’s perspective— especially as the concept of “qi” is equal to “encompassing air, breath, anger or dignity” etc. It could be everything. The author tries to differentiate “qi” from the mainstream discourse in contentious politics. However, broadly speaking, the psychological factor is always an important facet to explain the occurrence of collective action. Tracing back to McCarthy and Zald (1977), discontent and emotional frustration is also a premise for the advent of collective action, especially when supported by rich resources and power. Finding out what exactly is the underlying mechanism under the name of “qi” would be more interesting for readers to find out. The book enables a new perspective to understand contentious politics from the Chinese discourse.