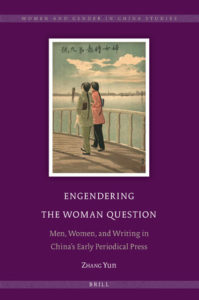 About the book: In Engendering the Woman Question, Zhang Yun adopts a new approach to examining the early Chinese women’s periodical press. Rather than seeing this new print and publishing genre as a gendered site coded as either “feminine” or “masculine,” this book approaches it as a mixed-gender public space where both men and women were intellectually active and involved in dynamic interactions to determine the contours of their discursive encounters.

Drawing upon a variety of novel textual modes such as polemical essays, historical biography, public speech, and expository essays, this book opens a window onto men’s and women’s gender-specific approaches to a series of prominent topics central to the Chinese woman question in the early twentieth century.

The publication was supported by the HYI Publication Grant for Alumni.

About the author: Zhang Yun was a HYI Visiting Fellow from 2012-13